The airline giant is firing on all cylinders and expects further profit growth ahead.

Last week, we were pleased to announce a contract renewal with American Express, extending our agreement through 2029. ... Delta's benefit is expected to grow to $7 billion by 2023, up from $3.4 billion last year, and just $1 billion at the start of this decade.
-- Delta Air Lines CEO Ed Bastian

Delta Air Lines recently signed a long-term renewal of its important credit card partnership with American Express (AXP 10.54%). The current AmEx deal had been set to expire in 2022, but the two companies extended their agreement to 2029.

While the exact terms of the new agreement are confidential, Delta expects approximately $500 million of incremental revenue this year from the renewal. That likely indicates that American Express offered improved terms in order to maintain its valuable relationship with Delta. Delta expects steady growth in revenue from the AmEx partnership beyond 2019, as the number of co-branded credit card holders grows and those cardmembers increase their spending. And there will be another big step-up in revenue in 2023, presumably due to Delta getting an even better revenue split from American Express. As a result, management is highly confident that this high-margin revenue stream will more than double to $7 billion between 2018 and 2023.

During the first quarter, 55% of our revenues came from premium products and non-ticket sources. Premium product revenues were up 8% to more than $3 billion in the March quarter on a 4% increase in premium capacity. Looking forward, premium revenue growth should accelerate through the year.
-- Delta Air Lines President Glen Hauenstein

The American Express partnership is just one of several growing revenue streams helping Delta rely less on the pricing of economy fares, which have been more-or-less commoditized.

For example, Delta got about 35% of its passenger revenue from business class and extra-legroom seats last quarter. New sales techniques and the rollout of premium economy seats across Delta's widebody fleet are driving strong growth in this premium product revenue. The company also expects revenue from its third-party maintenance business to grow at a double-digit clip this year -- surpassing $800 million -- before reaching $2 billion within five years.

Demand for SkyMiles as a currency is stronger than ever. Mileage redemptions grew 12% in the March quarter, as we provided customers more opportunity to use their miles. ... Increasingly, customers are using miles for products and services beyond just award tickets, as we expand miles as a form of payment.
-- Hauenstein

The SkyMiles loyalty program is another key driver of sticky, high-margin revenue. Delta has invested in giving customers more options for redeeming their miles, with a particular focus on upgrades to premium seats. These upgrades can now be purchased with miles as part of the initial fare or at any point thereafter, including in the Delta app when checking in.

These efforts are driving strong growth in loyalty redemptions. That's helping to boost Delta's earnings growth, because the carrier defers revenue when it doles out SkyMiles and only books that revenue when the miles are redeemed. Furthermore, the big uptick in SkyMiles redemptions indicates that customers are finding the program more worthwhile. Over time, that will make the SkyMiles currency even more valuable to business partners like American Express.

4. Another aging aircraft type is on the way out

[W]ith the efficiency gains we've made through our fleet transformation, we expect to accelerate the retirement of our MD-90 fleet.
--Delta Air Lines CFO Paul Jacobson

Delta Air Lines' cost performance was just as impressive as its revenue performance last quarter. Adjusted nonfuel unit costs ticked down slightly in Q1, while fuel efficiency improved 2.1% year over year. An aggressive program to upgrade Delta's fleet has been the primary driver of the company's improving cost trends. Recognizing the success of this effort, Delta recently decided to retire its remaining MD-90s earlier than expected.

The March quarter result and incremental benefit from AmEx give us increasing confidence in achieving the high end of our full-year free cash flow guidance of $3 billion to $4 billion compared to $2.3 billion last year.
-- Jacobson

Delta's aggressive fleet renewal plan has driven a substantial increase in capex recently. This caused free cash flow to recede quite a bit from the highs of a few years ago. 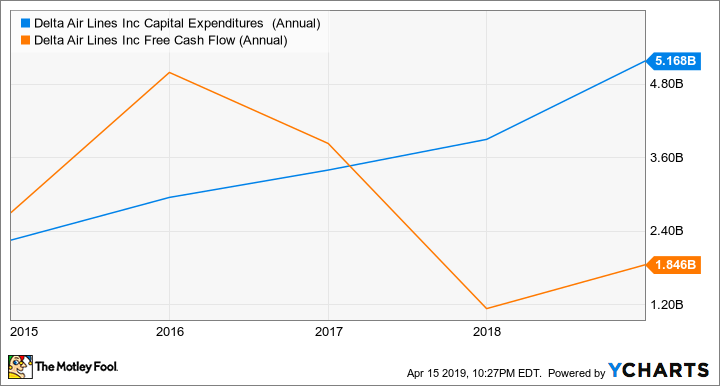 However, Delta has been predicting a rebound in free cash flow to between $3 billion and $4 billion this year. Now, management is increasingly confident about hitting the high end of that target range, largely thanks to the $500 million in incremental revenue expected from the American Express partnership renewal.

An increase in cash tax payments could cause free cash flow to decline again in 2020. But after Delta finishes funding its pension plan -- and as its profit continues to grow -- free cash flow should be able to march even higher, allowing Delta to reward its shareholders with steady dividend growth and share buybacks.