When Toys R Us closed, it left a shopping void in more than one industry. The fact that the once-popular chain's bankruptcy fell near the holidays made toys an obvious area for majors rivals Walmart (NYSE:WMT) and Target (NYSE:TGT) to expand into.

The death of the toy chain, however, also meant the end of its Babies R Us brand (at least in the United States). Losing that brand took away an obvious retailer for soon-to-be parents to register for gifts.

Both Target and Walmart sell baby gear, and Target already offers a baby registry. Now Walmart has stepped into the space and launched a registry of its own. 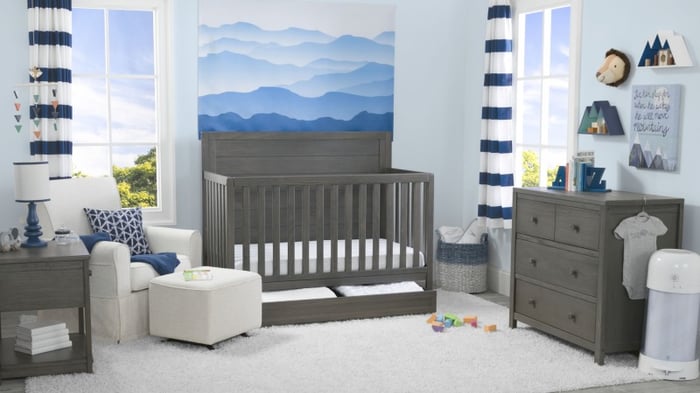 Walmart spent the past year increasing its selection of baby-related merchandise according to a blog post by Lauren Uppington, Walmart U.S. General Manager, Baby. The company also launched an online shopping experience for the nursery, and has created its own take on a baby registry.

"When talking with customers, we kept hearing one key theme -- that starting a baby registry is incredibly overwhelming and they'd like a more filtered list to begin their planning," she wrote. "So, we've made it easier for parents to create, manage and add items to their registry, all while adding a personal touch."

The new registry is built around a chatbot named Hoo the Owl. The chatbot starts the process by asking registrants for facts like "due date, gender (or gender neutral), state, and preferred nursery theme." It's meant to be a fun process, and the answers allow Walmart to pre-populate a gift list with items based on the person's answers.

"In the coming months, Hoo will ask additional questions, such as organic and sustainable product preferences, to provide an even more personalized experience," according to Uppington. "And, timed to the launch of the registry, we're introducing four new nursery themes -- woodland, modern options for baby boy and baby girl, and a classic gender-neutral option."

These join four existing themes: boho chic, modern grey, and classic options for boys and girls. The new registry will also be mobile-friendly, with tools that make it easy to share with friends and family.

Why is Walmart doing this?

Walmart has embraced a truly omnichannel model, and this furthers that. Customers can still register for items in its stores, and roughly 2,000 of its locations will have an expanded baby section to allow soon-to-parents to be hands-on.

This system, however, takes a somewhat archaic process -- walking around a store to select baby items you hope to receive as gits -- and brings it into the digital era. In addition, Walmart has taken something that's a bit daunting and made it easier.

Because there are constantly new parents, and because they may repeat the process several times, this audience is forever in play. Babies R Us customers are a potential audience, but the reality is that new parents likely had never started a gift registry there.

Walmart has a huge customer base, and there's no reason it can't get the parents in that crowd to use this service. This is Walmart positioning itself as a true rival to Target and not ceding the registry market to its brick-and-mortar rival.

There's no reason to believe this move won't work (aside from snobby resistance to asking for gifts from Walmart). It's likely the company has enough fans to make this a success that tightens the company's relationship with new parents.