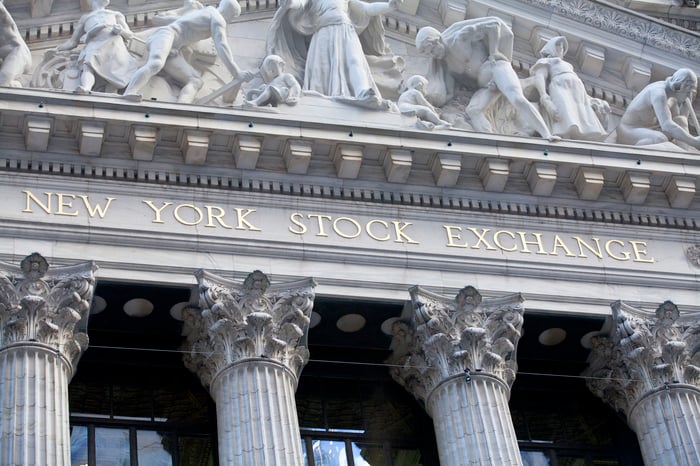 Johnson & Johnson beat expectations for first-quarter results and raised full-year guidance, and shares rose 1.1%. Revenue was flat at $20 billion but exceeded the analyst consensus of $19.6 billion. Earnings per share declined 13.1%, but after adjusting for special items including litigation expense, EPS grew 1.9% to $2.10. Wall Street was expecting EPS of $2.04 on that basis.

Johnson & Johnson reported that sales growth on an operational basis, which excludes currency effects, acquisitions, and divestitures, was 5.5%. That increase was mostly due to a strong performance by the company's pharmaceutical business, which had operational growth of 7.9%. Gains from anti-inflammatory medicine Stelara and cancer drugs Imbruvica and Darzalex overcame the decline by Remicade, the company's top revenue-generating drug, which is under competitive pressure from biosimilars. Consumer sales increased 0.7% operationally and medical devices grew 4.3%.

Johnson & Johnson raised guidance for operational sales growth in 2019 from 2%-3% to 2.5%-3.5%, saying on the conference call that the effect of biosimilar competition will be toward the low end of its earlier estimate and that sales of its core products remain strong.

Health insurance giant UnitedHealth Group reported strong revenue and profit growth in the first quarter, but shares fell 4% after opening higher on the news. Revenue grew 9.3% to $60.3 billion and adjusted earnings per share increased 22.7% to $3.73. Analysts were expecting the company to earn $3.59 per share on revenue of $59.7 billion.

UnitedHealth's Optum division, which provides health services including pharmacy benefit management, had 11.7% revenue growth and a 13.6% increase in operating profit. The company's UnitedHealthcare unit, which provides health insurance coverage, grew revenue by 7.6% and operating profit by 23.1%. The overall company expanded net margin to 5.7% from 5.1% in the period a year earlier. UnitedHealth also raised its full-year EPS guidance 5% at the midpoint to a range of $14.50 to $14.75.

Despite stellar results, CEO David Wichmann may have triggered investor anxiety with prepared remarks attacking "Medicare for All" proposals, saying that some approaches could destabilize the nation's health system. Analysts on the conference call were also concerned about the impact of potential changes to the rebate system.