Of the large banks, JPMorgan Chase (NYSE:JPM) is thought to be among the best-run. And while it trades at a small premium to other large financial institutions, all of the major banks trade at very low valuations relative to the market. JPMorgan is no exception, currently trading at just 11.8 times earnings, in spite of a recent earnings report that beat analyst estimates handily.

In that recently reported quarter, JPMorgan again proved why it deserves its premium relative to its large-cap banking peers. Besides its headline earnings beat, the more granular banking metrics investors track also were also very impressive. Here's what they were, and why investors should take a fresh look at this old institution. 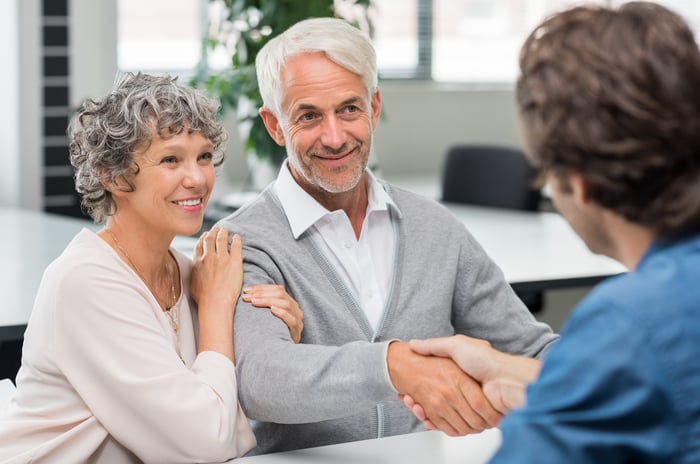 Return on tangible equity: Up

Let's start with return on tangible common equity (ROTCE), which is net income divided by tangible equity -- essentially a bank's equity minus goodwill and intangible assets. JPMorgan's ROTCE came in at 19%, which is very strong relative to other banks. It was also a big improvement over the fourth quarter's mere 14%, though roughly flat compared to the first quarter of 2018. Still, the quarterly figure exceeded JPMorgan's full-year 2018 ROTCE figure of 17%.

No doubt, the Tax Cuts and Jobs Act of 2017 is helping juice net income, though as we'll see in the following sections, JPMorgan's fundamentals are also outperforming.

Adding to the impressiveness of JPMorgan's surging returns on equity is the fact that the bank's equity itself also got bigger last quarter.

Common equity tier one capital (CET1) is a risk-weighted measurement of equity capital, measured according to the Basel III capital rules. Because JPMorgan is a systemically important financial institution, it has to retain a higher amount of capital than it did prior to the 2008 financial crisis and, because of its size, higher than most other banks. On Jan. 1, the limit was raised to 10.5%, due to regulations that became fully phased in at the end of last year.

So even though the company's 19% was ROTCE was equal to that of the year-ago quarter, it earned those returns on a higher amount of capital, making the last quarter's profitability all the more impressive.

JPMorgan also showed progress in lowering its efficiency ratio (the company calls this its overhead ratio), which measures non-interest costs divided by overall revenue. The lower this figure, the better -- though different banks will have different efficiency ratios, depending on their business mix, so a bank's efficiency ratio should really be compared against its own history.

Here again, JPMorgan shined with a 55% efficiency ratio, down from 59% in the fourth quarter and 56% in the year-ago quarter.

What's impressive about this is that JPMorgan's expense ratio has been coming down even as the company expands its branch footprint into under-penetrated areas this year. New branches cost money to build and staff, but they don't mature for several years. So to see the efficiency ratio not only remain stable but actually decline amid these growth plans is especially encouraging.

Won't take yes for an answer

Despite these strong results, JPMorgan's stock only received a slight bump in value, as investors remain skittish about the macroeconomic environment. JPMorgan's net interest margins have expanded as the Federal Reserve has hiked interest rates, but now that the Fed is "on pause," that margin expansion could end. In addition, some are worried the Fed's pause may be a signal we are getting near the end of the economic cycle.

Yet on the recent conference call with analysts, JPMorgan's top brass didn't see much in the way of a downturn. CFO Marianne Lake said, "While lower long end rates may be a net small drag in the short-term on earnings, there's the credit on the balance sheet and you could argue a patient Fed and lower rates for longer may elongate the cycle. So, net-net, there are pluses and minuses."

In other words, the cessation of interest rate hikes may limit near-term margin expansion, but if lower rates help boost economic growth, there will be more loan demand and financial health overall, which could keep earnings growth in positive territory.

JPMorgan may not be a high-flying growth stock, but it's displaying solid earnings growth on top of conservative leverage ratios. No wonder it's one of Warren Buffett's current favorites. Given that the company will likely continue raising its dividend and repurchasing stock at bargain-basement levels, you could do far worse than buying into JPMorgan's stock today.