The video conferencing company was able to capitalize on strong investor interest.

The stock of Zoom Video Communications (ZM -0.97%) raced out of the gate on Thursday, its first day of trading.

The company made its public debut on the Nasdaq stock market, quickly gaining as much as 80% from its offering price of $36 a share. Shares have given back some of those gains, but were still up a mind-boggling 77% and trading at $63.78 at 12:40 p.m. EDT.

The anticipation had been building in advance of the video conferencing specialist's debut. The company had the rare distinction of being profitable prior to filing for its IPO in late March, helping to stoke investor excitement. 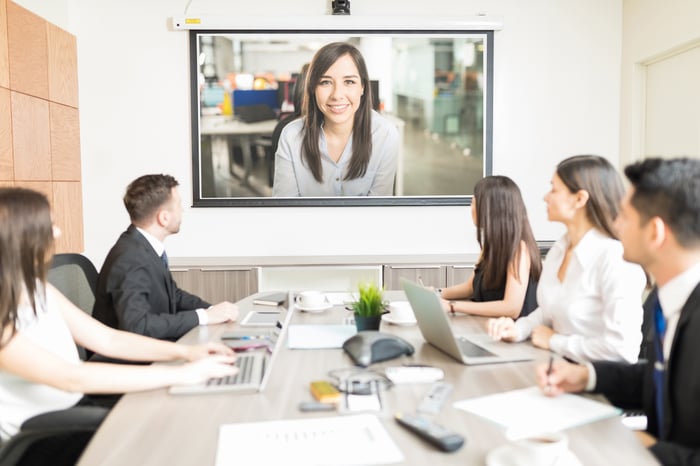 Strong demand for the shares

Heavy investor interest had driven up the price of the stock in advance of its trading debut. Zoom had initially planned to price its shares in a range of $28 to $32 per share, which would have valued the company at $8.25 billion at the high end of that range.

Significant demand, however, drove the company to increase the offering range to between $33 and $35 per share, according to Zoom's revised S-1. That would have valued the company at as much as $8.9 billion.

In a rare move, Zoom priced its shares above the high end of its revised range, at $36 per share. That drove its estimated value to $9.2 billion. Zoom offered 9,911,434 Class A common shares, which raised about $357 million for the company. Apparently, Zoom greatly underestimated the public interest in its shares.

What drove the interest?

The rising price of the offering is an indicator of strong demand among investors. But why the heavy interest? Zoom is one of the rare breed of companies that was already profitable when it made its public debut, booking profits of $7.6 million last year. Many recent and upcoming IPOs pale by comparison.

Buying into an IPO is already a risky venture, as these companies don't have a public track record. Investing in a company that is already profitable helps to mitigate some of the risk, which evidently drove interest in Zoom's shares.

It isn't just profitability that attracted investors to the company. Zoom reported revenue in fiscal 2019 (which ended on Jan. 31) of $330 million, up 118% year over year. That's even more impressive considering revenue soared 149% in the prior year. The company is also generating significant cash flow, which topped $51 million in 2019. Net income came in at $7.6 million, up from a loss of $3.8 million in 2018.

The company's business structure was also a factor in the demand for its shares. Zoom operates a software-as-a-service (SaaS) model, providing cloud-based video conferencing services. This type of business is less dependent on one-time sales and generates a great deal of recurring revenue, which puts the company on a stronger financial footing (another highly desirable feature).

Even in the wake of strong investor demand and a significant price run-up on its first day of trading, Zoom will have much to prove in the months and years ahead. While Wall Street is enamored with the company today, Zoom will need to show that it can continue to maintain its strong financial performance.

It also bears mentioning that, as a newly minted public company, shares of Zoom will be extremely volatile in the short term and could come crashing down as quickly as they skyrocketed. Lyft is a great example of the volatility investors can experience; that stock ended its first day of trading up nearly 9%, but has since fallen in price more than 25%.