3D Systems (NYSE:DDD) is slated to report its first-quarter 2019 results after the market closes on Tuesday, May 7.

Unlike in recent quarters, it's on track to be the latter of the two leading publicly traded, pure-play 3D printing companies to report. Stratasys (NASDAQ:SSYS) is scheduled to release its earnings before the market opens on Thursday, May 2.

Shares of 3D Systems are up 7.1% in 2019 through Thursday, April 18. (The market was closed on April 19.) For context, shares of Stratasys have gained 32.2% over this period, while the S&P 500 has returned 16.6%. Stratasys stock has also outperformed 3D Systems stock over the last year. 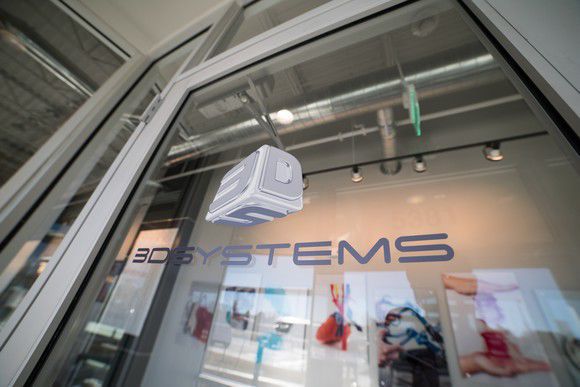 As was the case for 2018, 3D Systems' management did not provide specific guidance for 2019. However, CFO John McMullen said on last quarter's earnings call that the company expects "continued revenue growth, improved profitability, and cash generation" this year.

For the first quarter of 2019, Wall Street expects 3D Systems to deliver an adjusted loss per share of $0.01 on revenue of $164.8 million. This represents a 67% loss contraction and a 0.7% revenue decline year over year. While long-term investors shouldn't place much importance on the Street's near-term estimates, they can be handy to keep in mind, so you're not blindsided by market reactions.

Investors will be watching revenue closely, as year-over-year growth has decelerated over the last two quarters. This metric was 1.9% in the fourth quarter of 2018, 7.6% in the third quarter, 10.7% in the second quarter, and 6.1% in the first quarter. The company launched many new products in 2018, so we'd expect to see solid revenue growth in 2019 -- perhaps not in the first quarter but certainly by the second half of the year.

Investors should continue to focus on sales of 3D printers. This business is much more important than suggested by its contribution to overall revenue, which was 22.5% last quarter. Sales of 3D printers drive future sales of print materials, which sport higher margins than the other segments of the company's business.

In 2018, materials sales climbed just 1% year over year. McMullen said on last quarter's call that management expects year-over materials growth this year, with "higher growth beginning in the second half of 2019."

In the third quarter of 2018, 3D Systems management pushed back the timeline to 2019 for starting to ship modular Figure 4 systems. (Figure 4 is a fast, scalable, stereolithography (SLA) 3D printing system aimed at the production of small plastic parts.) This timeline has been pushed back several times.

Investors should expect an update on the earnings call about the company's progress selling these systems. As I wrote in last quarter's earnings preview:

Figure 4 is probably integral to 3D Systems' long-term success. It's the company's entrant into the fast production 3D printer space -- a space that's projected to grow notably over the long term. HP and venture-funded Carbon were the early entrants in this realm.

Keep an eye on 3D Systems' cash flows. In 2018, the company generated $4.8 million in cash from operations, whereas Stratasys took in $63.7 million. Both companies generate roughly the same annual revenue, so it's fair to compare their cash flows.

Moreover, 3D Systems' free cash flow was negative last year. The company ended 2018 with $110 million of cash on hand, down from $136.3 million in 2017. This was in part due to the company launching many new products last year. Investors should expect to see some indication this year that this spending is paying off.