Apple (AAPL 0.19%) announced a surprise settlement with Qualcomm (QCOM 0.25%) last week, ending over two years of escalating litigation while bringing the mobile-chip giant back on as a supplier for baseband modems, one of the most important components inside the iPhone. Intel immediately announced it was bailing on the 5G modem market after being Apple's exclusive 4G modem supplier for 2018 iPhone models. Qualcomm will expectedly provide 5G modems for the 2020 iPhones, but Apple generally prefers to dual-source whenever possible.

The tech giant may turn to frenemy Samsung, which already provides many other components in Apple products. 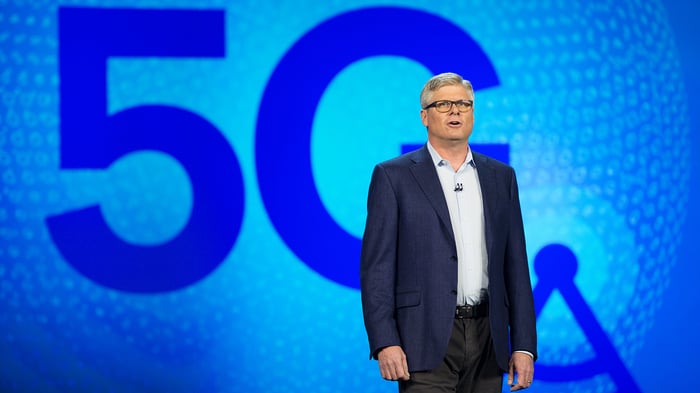 Two suppliers is better than one

Respected TF International Securities analyst Ming-Chi Kuo has just released a research note (as reported by MacRumors) that predicts Qualcomm and Samsung will be Apple's 5G modem suppliers for the 2020 product cycle. Apple would only utilize Samsung modems for select markets.

"We expect Apple will likely adopt 5G baseband chips made by Qualcomm (focus on mmWave markets) and Samsung (focus on Sub-6GHz markets) for lowering supply risk, reducing costs and having better bargaining power," Kuo wrote. In the U.S., AT&T and Verizon are focusing on mmWave in their initial 5G deployments, while T-Mobile and Sprint are emphasizing sub-6 GHz at first.

Apple had initially wanted to dual-source modems in 2018 as well, COO Jeff Williams testified in January, but Qualcomm was unwilling to supply chips due to the ongoing legal battle. 5G is expected to be the headline feature next year, and Kuo is modeling for Apple to sell 70 million to 75 million flagship iPhones in the second half of 2020. Total iPhone volumes for the year are expected to be 195 million to 200 million, according to Kuo's estimates.

Qualcomm is "the best"

The analyst's note comes shortly after it was revealed through court documents that Apple internally referred to Qualcomm's technology as "the best," according to a recent report by The Washington Post. That contrasts with Apple's public statements throughout the spat that sought to undermine the validity or value of Qualcomm's technology. Apple saw that strategy as a way to help reduce its royalty burden, which it had characterized as "extortion-level" in its initial complaint from 2017.

With the legal battle now in the rearview mirror, Apple has secured access to "the best" 5G modems for next year, but bringing Samsung onboard as a secondary supplier will mitigate supply-chain risk and reduce Apple's reliance on Qualcomm. Considering how the risk associated with relying on Qualcomm has played out over the past few years, culminating in the sprawling legal war, that's a very good thing.