Healthcare stocks have been hammered recently after the market seemed to suddenly wake up to the possibility that politicians may make some policy changes that cut into profits. There's nothing new about this, but some stocks in the sector that were already cheap just got cheaper, and investors who favor these traditionally defensive stocks may want to look for good buys now.

Among large drug manufacturers -- those with market capitalization over $10 billion -- the two stocks that have fallen the most in 2019 are Biogen (NASDAQ:BIIB) and AbbVie (NYSE:ABBV). Are either of these stocks a bargain now? 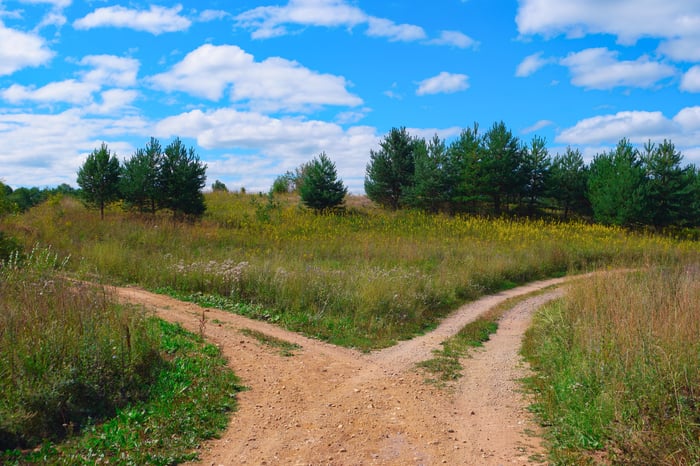 Neither of these stocks have performed well over the past year. Biogen stock is down 24.5% so far in 2019, but 2018 wasn't a good year, either, with the stock down 14.6% in the last 52 weeks. Looking back three years, the picture doesn't get any better, with the share price down 16.2% since then. AbbVie shares are down 13.2% year-to-date and off 12.2% from a year ago. The longer-term picture for AbbVie is better though; its shareholders enjoyed 45.7% price appreciation over the last three years.

These stocks have similarly low valuations, both in comparison to peers and relative to their recent histories. Biogen sells for 8.7 times trailing 12-month earnings per share and 8.0 times management's guidance for 2019. AbbVie looks more expensive from a GAAP earnings perspective, but that's because the company took a big impairment charge last year. Excluding that non-cash write-off, it sells for a P/E of 9.9 on trailing earnings and 9.0 times earnings guidance for this year.

There's no question of a winner in this category. Biogen doesn't pay a dividend at all, which is unusual for a major drug company. AbbVie, on the other hand, has a generous payout which it has raised every year since the company spun off from Abbott Laboratories in 2013. The stock yields 5.5%, near the top of its peer group, and the dividend should be safe and continue to rise. Dividend payments only required 42% of AbbVie's operating cash flow last year.

A big reason for the low valuations of the two companies is that investors are concerned about their ability to generate growth from their approved drugs, despite both having leadership positions in a market.

Biogen is a recognized leader in treatments for neurodegenerative diseases and specifically multiple sclerosis (MS), but sales are slowing. It has four blockbuster drugs to treat the disease, including Tecfidera, with $4.3 billion in sales in 2018. MS drug sales of $8.6 billion accounted for 64% of the company's revenue, but were down from $9.0 billion in 2017, thanks to new competition in the space. Biogen also gets royalties from Roche for Ocrevus, an MS drug that the companies partnered to develop, and those royalties tripled in 2018 to $478 million. Ocrevus growth is a double-edged sword for Biogen, though, because its success is cutting into sales of the company's wholly owned drugs.

Biogen has some other growth drivers in its portfolio, including Spinraza for spinal muscular atrophy, jointly developed with Ionis Pharmaceuticals, and a growing business in biosimilars. But the plateau in MS will continue to be a drag on revenue growth, which was 9.6% in 2018 and estimated by Biogen to slow to 1.8% this year .

AbbVie has a similar problem. Humira, a drug for autoimmune diseases such as arthritis and Crohn's disease, is the top-selling drug in the world and accounts for about 61% of the company's revenue. But sales of Humira are under attack from biosimilar competition in international markets. Amgen's Amjevita launched in Europe last October, but an agreement with AbbVie means it won't be marketed in the U.S. until 2023.

Humira sales grew 7.4% excluding currency effects in 2018, but the upward trend will reverse this year. AbbVie expects domestic Humira sales to grow 7% in 2019, but international sales to drop 30%. The net effect would be a 4.6% decline in total Humira revenue from $19.9 billion last year to $19.0 billion.

AbbVie is enjoying growth from lower-volume products in other therapeutic areas that are helping to offset Humira losses. Sales of blood cancer drugs grew 46% to $3.2 billion last year, and one, Venclexta, is still very early in its life, having been approved in November. The company's hepatitis C treatment Mavyret was a surprisingly big winner last year, bringing in $819 million in revenue and grabbing 50% market share from entrenched competitor Gilead Sciences.

Overall, though, Humira losses will take almost all the steam out of AbbVie's revenue growth in 2019, which the company expects to come in at about 1%, not including any contributions from new drugs that could launch this year.

Both Biogen and AbbVie have had pipeline setbacks in the last year, but one of the companies is holding a much stronger hand now.

Last month Biogen made a surprising announcement that it was discontinuing two late-stage clinical trials of its Alzheimer's drug aducanumab, sending the stock crashing 29% in a single day. The company and investors had high hopes that the drug would be a game changer for treating the disease, but the failure was just the latest in a string of failures by many companies going after Alzheimer's.

The flop eliminated Biogen's most promising asset in phase 3 trials. It also cast doubt on one of the three remaining drugs in late-stage testing, elenbecestat, which is another Alzheimer's drug that, like aducanumab, targets amyloid plaques. The other two drugs in phase 3 trials are BIIB093 for stroke, which the company expects could generate $1 billion in revenue in 2022, and Vumerity (also known as BIIB098 and ALKS 8700), a next-generation MS drug licensed from Alkermes that could help compensate for losses by Tecfidera. Biogen and Alkermes have filed a New Drug Application (NDA) for Vumerity, expecting a decision in the fourth quarter and a potential launch early next year.

AbbVie's big flop was the cancellation of a phase 3 trial of Rova-T in advanced small-cell lung cancer late last year. That was a big disappointment, as it appears the lead drug from the expensive Stemcentrx acquisition could be a total failure. Rova-T was expected to produce multiple billions in annual revenue, but even though AbbVie hasn't given up on it, the company's remaining pipeline has assets on the verge of approval that have huge potential.

Risankizumab, a next-generation immunology drug, could get a decision from the FDA in the next few days in an initial indication for psoriasis. The company has also filed an NDA for upadacitinib in rheumatoid arthritis and expects a decision in the third quarter this year.

Both drugs are part of AbbVie's strategy of supplementing and replacing Humira over time with superior treatments and patent protection well into the future. AbbVie believes that the two together will launch in over 12 indications and will contribute over $10 billion in incremental risk-adjusted sales by 2025.

Besides those two potential blockbusters that could launch this year, AbbVie is testing depatuxizumab mafodotin, a drug for the difficult-to-treat brain cancer glioblastoma, in a phase 3 trial that will read out later this year. Altogether, the company has 16 phase 3 trials under way and believes non-Humira sales will grow from $12.8 billion last year to $35 billion in 2025.

The business with the most potential wins

The market has put both Biogen and AbbVie in the same bucket, punishing these two stocks more than any other major drug manufacturer this year and giving them roughly equal valuations that are among the lowest of their peers. The performance of their drug portfolios and expected revenue growth this year are quite similar and would seem to support the idea that the businesses should get the same treatment from investors.

There are two big differences, though, and both point to AbbVie as being the better opportunity. AbbVie has a much stronger near-term pipeline and pays a hefty dividend to its investors while they wait for those drug candidates to come to market.

AbbVie has 16 late-stage drug trials to Biogen's three, and could launch two of the most valuable pipeline assets in the industry this year. The company's dividend is safe and provides some downside protection to the stock price. Biogen, on the other hand, had a failure of its most valuable pipeline asset, has less in the way of near-term launches in its plans, and pays no dividend at all.

Biogen needs to prove it can generate growth for the long term, and its valuation reflects that. AbbVie's potential is being overlooked by the market now, and that makes it the better buy.