On a lackluster day for Wall Street, Kimberly-Clark posted a profit surprise, but Intuitive Surgical fell after reporting earnings.

Stocks drifted mostly sideways in low volume Monday as investors looked forward to some closely watched earning reports this week. The Dow Jones Industrial Average (^DJI -0.21%) closed down and the S&P 500 (^GSPC -0.37%) posted a small gain. A 2.6% jump in the price of crude oil boosted the energy sector. 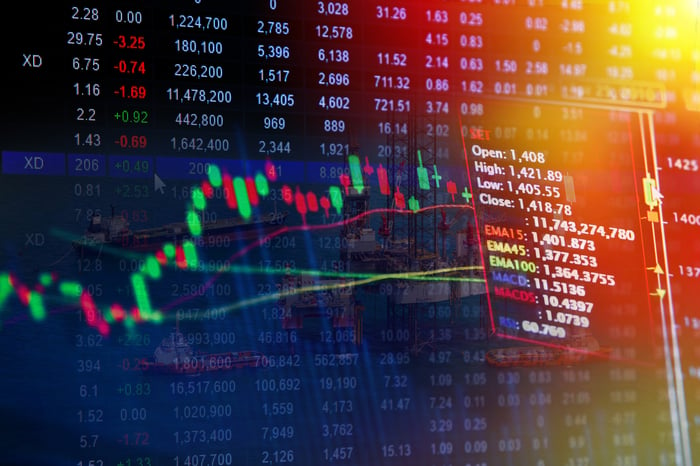 Price increases and cost controls helped Kimberly-Clark beat expectations for its first quarter, and shares jumped 5.4%. Net sales fell 2.1% year over year to $4.63 billion and adjusted earnings per share dropped 2.9% to $1.66. Analysts were expecting the company to earn $1.54 per share on sales of $4.53 billion.

Currency losses posed a 5% headwind to the company, so organic sales growth was 3%, led by 5% organic growth in personal care, the company's largest segment with $2.3 billion in sales. Sales in the consumer tissue business were $1.5 billion, with a 6% decrease in volumes canceling out 6% in net price increases for flat organic growth. Overall, the company had a 2% decline in volume with a 4% increase in pricing.

Kimberly-Clark saw $135 million of input cost increases, which was part of the reason why gross margin fell 30 basis points to 33.5%. The company was able to find $115 million in cost savings, keeping the operating profit margin steady at 17.4% after it dropped significantly last quarter.

Kimberly-Clark maintained its full-year outlook for 2% organic sales growth and EPS between $6.50 and $6.70.

Robotic surgery specialist Intuitive Surgical missed profit expectations when it reported first-quarter results late last week as customers shifted from purchasing robots to leasing them, and shares fell 7%. Revenue increased 14.9% to $974 million, about what Wall Street was expecting. Non-GAAP EPS rose 7% to $2.61, below the analyst consensus of $2.70.

Worldwide surgical procedures, which drive recurring revenue from disposable supplies, increased 18%. The company shipped 235 systems compared with 185 in the period a year ago, contributing to 13% growth in the installed base.

What hurt profit for Intuitive was an increase in the proportion of trade-ins and a shift from ownership to leasing for a growing proportion of its customers. Trade-ins were used for 36% of system sales in the quarter, compared with 31% in Q1 last year. Lease transactions represented 33% of total placements, an increase from 29% last quarter and 23% in the period a year ago.

The trend shift to leasing creates a future source of recurring revenue for Intuitive Surgical and reduces the volatility of systems revenue, but it also reduces profit in the current period, which is what investors fixated on today.