Could this be a fully subscription business in a decade?

Robotic surgery specialist Intuitive Surgical (ISRG 0.04%) reported first-quarter earnings this week. While growth in operations continued to increase at a very healthy pace, the company has also signaled that its business model is undergoing a notable change.

What will that change mean for the future? It's likely that short-term profits will be traded for long-term market share. Read on to get the details. 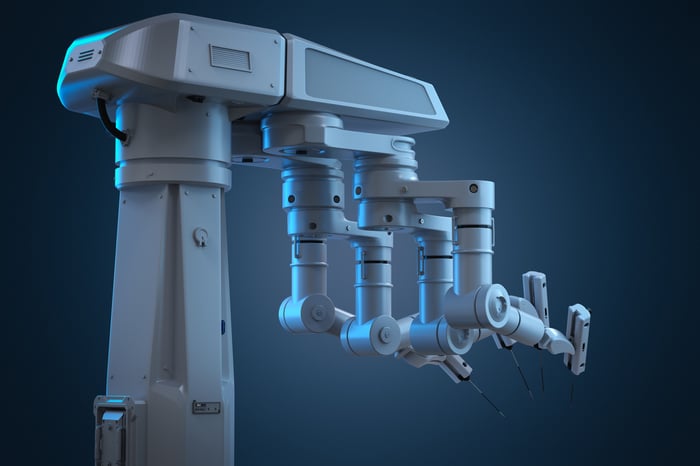 Before we get to that business model shift, let's take a look at how the company performed on the headline numbers for the first quarter.

No one likes to see earnings growing slower than revenue, but much of that is due to both the shifting business model and the buildup in the company's inventory (more on that later).

Of the three major divisions the company has, here's how the breakdown in growth added up.

The big story here is the fact that worldwide procedures jumped 18% compared to the first quarter of last year. It's encouraging to see instruments and accessories -- which are driven almost entirely by procedure growth -- increase even more.

Within the United States, procedures grew 17%, spurred by hernia and colorectal procedures, which have long been the growth drivers. On the former, CEO Dr. Gary Guthart said the company is still in the early innings of hernia procedure growth.

Outside the U.S., procedures increased 21%, led by strength in prostatectomies. To put the track record of procedure growth in perspective globally, here's how the company has fared on that metric since 2014. 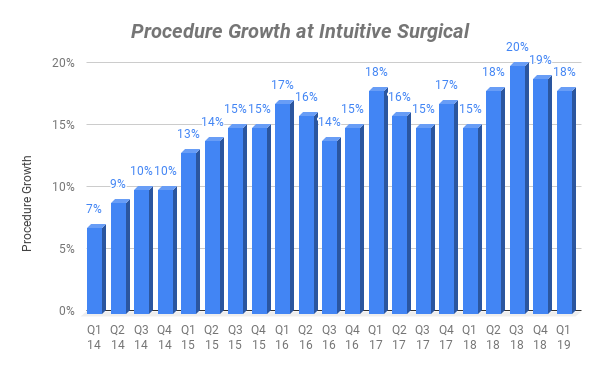 During the earnings call, management also discussed growth potential in bariatric procedures in the United States. Investors should look for progress in the procedure in the quarters to come.

System placements are set to change

Last November, I predicted a notable shift in the way Intuitive places its daVinci robotic surgical systems in hospitals worldwide, which is starting to come to fruition.

During the first quarter, Intuitive placed 235 systems, up a very healthy 27% from the same time last year. So why did systems revenue only jump 6%? The company has started offering alternative financing, primarily through operating leases and usage-based agreements.

There's a notable trade-off here: The company records less revenue (and profit) from system placements quarter by quarter. But -- the thinking goes -- this will result in more systems being placed globally, because they become more affordable. Over the decadeslong time frame, growth in procedures is what really matters. And the larger the installed base, the larger the long-term opportunity.

It's an approach management has no qualms about taking: One-third of all systems sold were under the umbrella of alternative financing.  CFO Marshall Mohr said: "If it were my choice, I'd find that leases and the alternatives that we're providing customers are favorable to us and that it creates a recurring revenue stream, eliminate some of the volatility of system placement revenue. And I think, in the long term, it will enhance any type of upgrade cycle that might come along."

There were three other announcements for the period that could start coming into play in future quarters:

Management had tightened the guidance for procedure growth for the quarter to a midpoint of 15% to 16%. Some on Wall Street may have been disappointed by this given that overall procedure growth came in at 18% -- implying a slowdown to come in the rest of the year.

On that note, management said constraints with system placements in China, combined with a more conservative approach to women's health procedures, could factor in. It's worth noting, however, that Inuitive has a well-documented track record of underpromising and overdelivering by the end of the year.