Major benchmarks slumped on Friday after data on the Chinese economy showed a continued slowing of growth. The Dow Jones Industrial Average (^DJI -1.68%) fell throughout the session due to negative news about some of its component companies, but the broader S&P 500 (^GSPC -1.93%) partially recovered in the afternoon. Technology shares were weak, but bank stocks made gains. 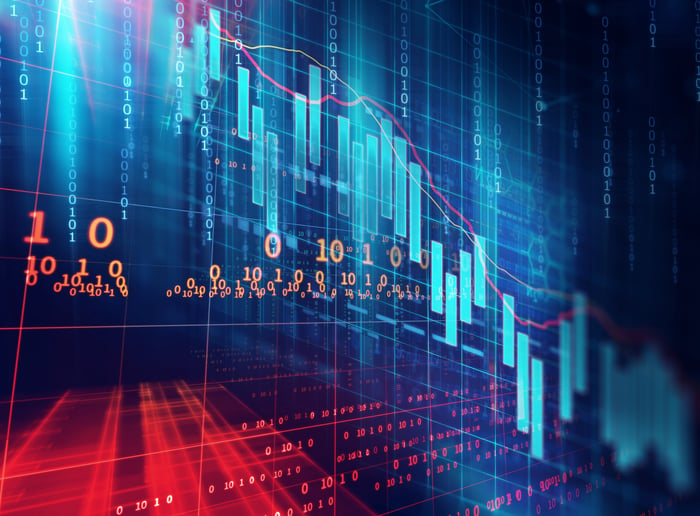 Surgical robotics specialist Intuitive Surgical beat expectations for the third quarter by a wide margin and shares soared 7%. Revenue grew 23% to $1.13 billion, compared with the analyst consensus estimate of $1.06 billion. Non-GAAP earnings per share increased 21% to $3.43, well ahead of the $2.99 that Wall Street was expecting.

Instrument and accessory revenue rose 25% to $606 million, while system revenue grew 23% to $339 million on a 19% increase in the number of systems shipped. Procedure growth was 20%, which was higher than earlier quarters this year partly because of an extra working day in the period, but equal to the rate in Q3 last year. Revenue per procedure climbed 4%.

Looking ahead, Intuitive Surgical raised its forecast for full-year procedure growth a full percentage point to a range of 17% to 18% and estimated gross margin to be between 71% and 71.5%, up from earlier guidance of 70% to 71%.

Analysts on the conference call asked about emerging competition, and Intuitive acknowledged that it could have an impact next year, but in the long term the opportunity is huge and new entrants could help accelerate broader adoption of robotic surgery.

Coca-Cola reported third-quarter revenue that exceeded expectations thanks to growth in some of its newer innovations, and shares rose 1.8%. Revenue grew 8% -- 5% excluding currency effects -- to $9.51 billion, compared with the analyst consensus of $9.43 billion. Reported earnings per share came in at $0.60, but excluding some one-time items, non-GAAP EPS declined 2%, about what analysts were expecting. Currency effects decreased non-GAAP earnings by 6%.

Unit case volume rose 2%, with a 2% increase in sparkling soft drinks, led by double-digit growth of Coca-Cola Zero Sugar. The company has also seen double-digit growth in year-to-date sales of its 7.5-ounce mini cans. Juice, dairy, and plant-based beverages inched up 1%, and water, enhanced water, and sports drinks climbed 2%. The launch of Coca-Cola Plus Coffee in 20 markets also contributed growth.

The consumer giant maintained its guidance for full-year EPS growth of between minus 1% and plus 1%, and the company is looking forward to the 2020 launch of Coke-branded energy drinks in the U.S. after European launches in Q3.