Intuitive Surgical (NASDAQ:ISRG), the runaway leader in robotic surgery, reported second-quarter earnings after market close on Thursday. The results were familiar: solid growth in just about every category.

But a key change in the company's business model continues to emerge. While the effects of this change have been small over the short term, they have the potential to make the company even more powerful in the long run. 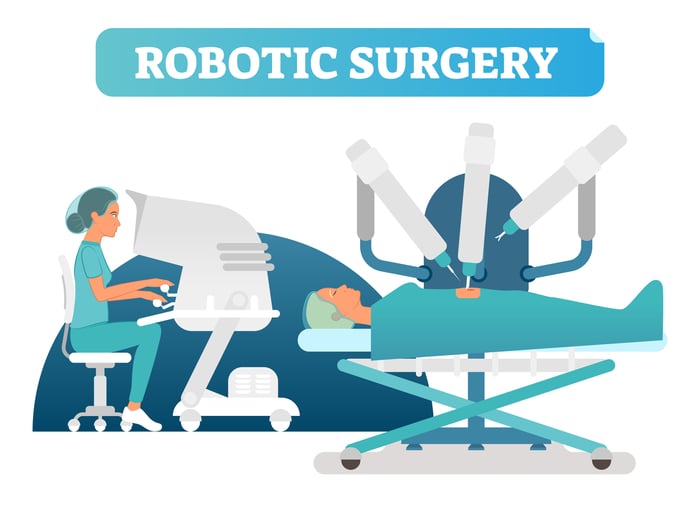 We'll get to the details of that business model change in a minute, but first, let's review how the company performed on the headline numbers.

While it's never exciting to see earnings growing slower than revenue, it's important to put this in context: Intuitive is ramping up its investments in international opportunities, its informatic (read: helpful data) capabilities, and its manufacturing scale. The latter is both to meet customer demand, and to increase inventory to hedge against trade wars.

Given those spending increases -- operating expenses jumped 31% on a non-GAAP (adjusted) basis -- the fact that the company was able to increase earnings at the clip it did seems much more reasonable.

Breaking the revenue growth down by the company's three segments looks like this:

But there are two story lines even more important to follow. The first has to do with the all-important procedure growth -- or the machines being used in more and more types of operations. At its core, Intuitive Surgical stock is only as valuable as the da Vinci machine's continued ability to help better patient outcomes in evermore procedures.

Showing 17% growth during the quarter, the exceedingly positive results continued. 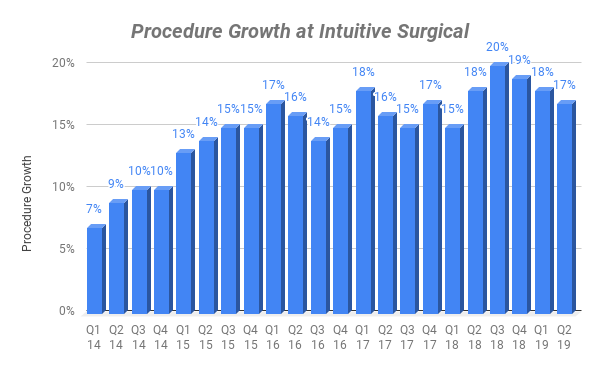 On the conference call, management said that U.S. procedure growth was 16%. The largest driver of that growth was "General Surgery" -- a catch-all category for everything outside of prostate, gynecology and urology procedures. While hernia and colorectal procedures continued to be two of the largest contributors within General Surgery, their growth rates slowed for the first time in a while. In their stead, bariatric (stomach and intestines) and cholecystectomy (gall bladder) saw procedure growth accelerate.

Outside of the U.S., procedure growth clocked in at 20%, with particular strength in Germany and France.

That means that roughly 9% of all systems are now under such agreements. While these agreements don't necessarily help juice returns in the short term, they have three distinct advantages:

All things considered, it isn't hard to see why management is excited about the long-term potential of this business model shift.

Here are some of the other tidbits from the report:

Management nudged its estimates for the rest of the year up slightly. The midpoint of procedure growth went from 16% to 16.5% -- but if history is any indication, this is probably lowballing it. It also said that it would continue spending heavily on growth opportunities, with capital expenditures of over $250 million for the year.

In the end, it was another solid quarter, which investors have become all too familiar with over the past five years.