Here's why enrollment growth came in at an eye-popping 82%.

If you're invested in a for-profit education company and you have a long-term outlook, there's one metric that trumps all the rest: enrollment growth. It's not that expenses and profitability aren't important. But without students flocking to your schools, there's little chance for everything else to fall into place.

So when Chinese K-12 education company New Oriental Education (EDU -4.73%) reports enrollment growth of 82%, there's a lot to be excited about. But dig into the details, and you'll see this figure was artificially inflated. While that might put a damper on the headline numbers, the school still reported solid progress across the board. 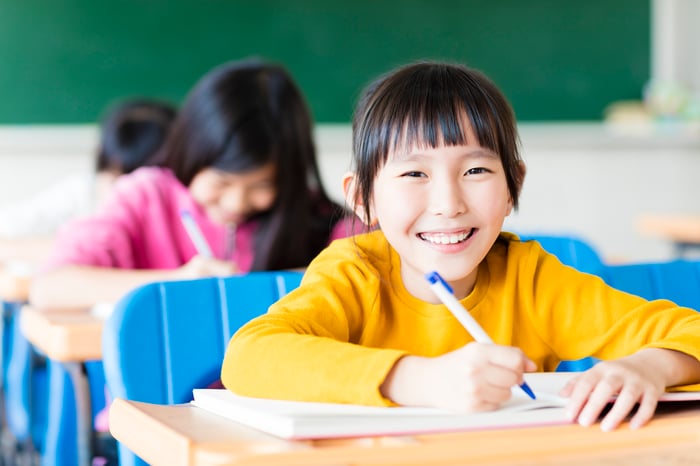 Before diving into those details, let's review how the company performed on key metrics.

There's a lot to unpack here. First and foremost is squaring how operating income could grow by 40% while earnings grew just 19%. The main culprit here was the timing of income tax payments. That line item alone more than doubled, but the effect should even out over the course of an entire year.

When share-based compensation is backed out, both the cost of revenue (teacher salaries and rent) and selling and marketing grew slower than revenue at 26% and 13%, respectively. These are positive developments; it's encouraging to see New Oriental growing revenue by 29% while only spending 13% more on marketing. It signifies important leverage and brand value.

And while a dip in free cash flow is never desirable, management has been clear about its intention to rapidly expand its base of schools. On that front, the company expanded its total square meterage by a whopping 27% year over year. It has added 164 new learning centers and schools in the past 12 months, which costs money. But that expansion appears to be working in growing revenue at scale.

Non-GAAP operating margins expanded from 13.1% to 14.3%. The key driver was a 200-basis-point expansion in utilization rates. In other words, many of the newer schools have yet to reach capacity. When they are under capacity, these schools' costs are the same -- teachers and rent -- leading to lower margins.

Later in the conference call, however, management gave a more apples-to-apples comparison. Here's how it broke down:

Perhaps most important for investors looking at New Oriental Education's moat were comments from management regarding retention rates. They stated the POP program had 90% retention, while U-Can program retention stood between 75% and 80%.

As the company expands, its two key advantages will be its brand value, which draws students in and benefits from scale, and its high switching costs, which will likely increase as students and families become familiar with the schools and grow increasingly reluctant to move to a rival.

New Oriental ended the quarter with $3.2 billion in cash and short- and long-term investments, against just $51 million in long-term debt. That gives the company incredible flexibility moving forward, especially as it expands its physical footprint.

Management also highlighted expansion of its dual-teacher format. In this format, one master teacher gives lessons to multiple classrooms via video conferencing, while an apprentice teacher in each individual classroom assists. If this proves successful, it could further improve the company's operating margins.

The second calendar quarter is the company's fourth fiscal quarter. For that quarter, management expects revenue to come in between $821 million and $841 million. That would represent growth of 17% to 20% in dollars, and 23% to 26% in local currencies.