As multibillion-dollar private tech companies go public, often surging on day one, it can be tempting to invest despite stratospheric valuations, massive losses, and questionable business models. Missing out on the next big thing is painful.

But even the best company in the world is a terrible investment at too high a price. It may not seem like valuation matters in the age of unicorns, but it absolutely does matter in the long run.

Two recent initial public offerings with valuations that look particularly out of sync with reality are music streamer Spotify Technology (NYSE:SPOT) and video-conferencing upstart Zoom Video Communications (NASDAQ:ZM). Here's why you should avoid both. 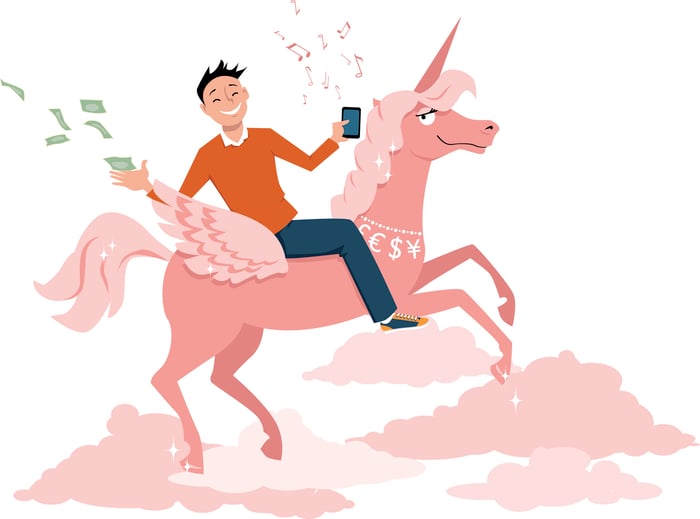 Spotify, the leading music streaming company, went public about a year ago and is now valued at roughly $25 billion. It expects to generate revenue between $7.15 billion and $7.65 billion in 2019, along with an operating loss between $225 million and $405 million.

Spotify's price-to-sales ratio isn't all that crazy compared to other high-flying tech stocks. But what is at least a little crazy is that Spotify's market capitalization is, as a piece in Barron's recently pointed out, larger than the annual revenue of the global recorded-music industry.

That would make more sense if music streaming was a high-margin business. But it's absolutely not. Spotify's gross margin will sit between 22% and 25% in 2019, according to the company's guidance, with much of its revenue going straight to those who own the content. That leaves little left over for the spending necessary to go toe to toe with a growing list of competitors.

Apple (NASDAQ:AAPL) Music has accumulated tens of millions of subscribers, and the iPhone giant doesn't mind not turning a profit. Apple CEO Tim Cook even said last year in an interview with Fast Company that "we're not in it for the money." Apple can afford to lose money on Apple Music if it helps sell iPhones.

Other major competitors include Amazon, which offers a limited music service to its Prime members and a more comprehensive music service to those willing to pay a monthly fee, and Pandora, which is now owned by Sirius XM.

When a company is on pace to do $7 billion in annual revenue, controls more than one-third of its market, and still can't turn a profit, that's a sign that it has no meaningful competitive advantages. Spotify's valuation makes no sense if it's just one of many music-streaming options.

Video-conferencing start-up Zoom priced its IPO at $36 per share. The stock exploded on its debut, and now trades for around $65 per share. That puts Zoom's market capitalization somewhere around $16 billion.

This is a company that did $330 million of revenue in fiscal 2019. The price-to-sales ratio is close to 50. That makes other high-flying subscription software companies look like bargains in comparison:

To be fair, Zoom is growing fast -- revenue more than doubled in fiscal 2019. And the company is profitable, although just barely.

Whether or not Zoom is a good company doesn't really matter when we're talking about paying 50 times sales for the stock. The growth expectations built into Zoom's valuation will be very difficult, if not impossible, for the company to achieve.

Zoom may succeed as a company, but the stock is a very different story.