The home-robotics specialist is plunging on seemingly disappointing Q1 results. But iRobot is perfectly content with where it stands.

iRobot (IRBT -3.77%) released mixed first-quarter 2019 results on Tuesday after the market closed, and Wall Street wasn't happy. Shares of the home-robotics leader are down more than 20% in response on Wednesday as of this writing, particularly as iRobot's revenue arrived below analysts' consensus estimates.

But before you go hitting that sell button, you might want to listen to what iRobot had to say about its latest quarter. Read on for four important topics iRobot management raised during the company's subsequent earnings conference call.

This quarter was exactly what iRobot expected

First quarter revenue grew 9% over Q1 2018 as expected. Q1 sell-through was good, setting us up for the higher year-over-year Q2 2019 revenue growth rate we discussed last quarter. Given our Q1 results and our outlook for the rest of the year, we are reaffirming our 2019 full-year revenue and operating income expectations and increasing our full-year expectations for earnings per share.

Long story short -- and though analysts were looking for higher first-quarter sales -- Angle says the company's start to the year is going just as well as the company had hoped.

As iRobot's growth accelerates in the coming quarters, it continues to expect 2019 revenue of $1.28 billion to $1.31 billion, up 17% to 20% from 2018. The company also increased its full-year earnings guidance for net income per share of $3.15 to $3.40, though mostly to account for a previously unforecasted one-time tax benefit recognized in the first quarter. 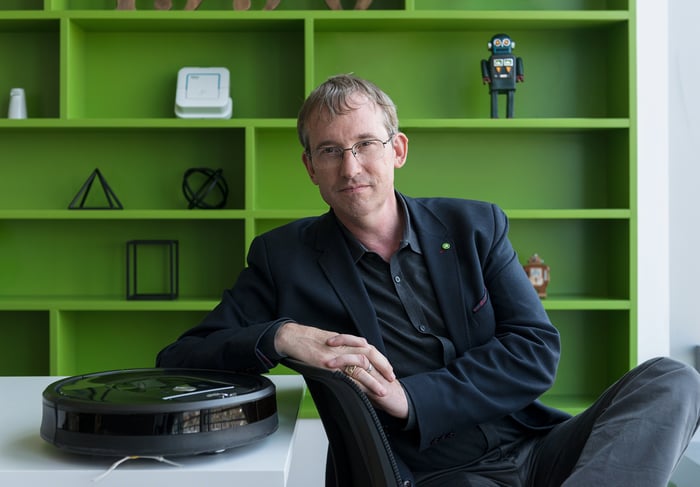 In the United States, retailers exited 2018 with more inventory than in prior years likely driven in part by a desire [to] obtain inventory ahead of the tariff increase originally scheduled for January 1st. As planned, we increased pricing on the i7/i7+ at the beginning of the year to partially offset the impact of tariffs. Despite the higher prices, Q1 demand was ahead of plan for this product.

Two things here: First, it seems at least some of iRobot's outperformance during the 2018 holiday-shopping season was driven by retailers amassing Roomba inventories before a planned hike in tariffs on robotic vacuums imported from China. Second, investors should take comfort knowing iRobot's latest Roombas are still selling well even despite the company's decision to increase already-steep price points to offset the impact of those tariffs.

On tariffs for the rest of year

At the 10% level, we anticipate $20-25 million of tariff costs to be incurred in 2019. As currently structured, the U.S. government has indefinitely postponed its increase in tariffs to 25% which was originally planned for March 1, 2019. If tariffs are increased at some point in 2019, we would likely increase our prices again to offset the incremental tariff costs incurred. Should the tariffs be lifted altogether, we would expect to lower prices to their pre-tariff levels. Any change in tariffs would take time to implement as we and our retailers work through channel inventory and we provide any contractual price change notifications to our partners.

Recall that as the U.S. and China moved forward in their trade talks earlier this year, stateside negotiators decided to delay a big hike in tariff rates. But iRobot knows all too well that hike could still happen -- which is why the company is taking action to diversify its supply chain away from manufacturers with China-based operations in the meantime.

But as Dean notes, that doesn't mean iRobot will selfishly maintain its higher prices should the two countries decide to make nice and eliminate tariffs going forward. Rather, in an effort that's likely as much doing the right thing as it is aggressively moving to secure market share in these early stages, iRobot would reduce its Roomba prices in kind.

New products are on the way

Gross margin is expected to be the lowest in Q2 and Q3 due to the introduction and rollout of new products in Q2 at margins that are lower than the cost-optimized products they are replacing, as well as our supply chain diversification investment and the traditionally heavy promotional activities associated with Mother's Day and Father's Day. In addition, our sales and marketing expense is expected to increase more than usual in Q2 to support the three new major product introductions this year.

For perspective, Angle noted earlier in the call that one of those new products will be iRobot's Terra, iRobot's first-ever robotic lawn mower -- which we know from previous announcements will launch in both Germany and in a beta program in the U.S. later this year. If Terra's launch is successful, it will effectively propel iRobot into a new multibillion-dollar global market.

Judging by Dean's comment regarding newer robots having lower margins "than the cost-optimized products they are replacing," however, it appears as though the remaining new product launches will revolve around either additional variants of iRobot's Roomba line or its increasingly popular floor-mopping Braava robots.

All things considered -- and contrary to what iRobot's plunge today seems to indicate -- iRobot management has made it clear the company is off to a solid start to 2019. And I think patient shareholders would do well to consider buying the stock today.

3 Charts That Might Have iRobot Shareholders Going in Circles
420%