Boeing posted double-digit declines in core earnings per share and free cash flow last quarter, and the impact of the Boeing 737 MAX grounding will be much worse in the second quarter.

Last month, one of Boeing's (BA 1.53%) new 737 MAX jets suffered a fatal crash for the second time in five months. Hardware and software changes in the 737 MAX (compared to older versions of the 737) appear to have contributed to the two disasters. The new MCAS system -- designed to prevent a stall -- instead sent each of the two planes into a fatal dive based on erroneous sensor data. As a result, the 737 MAX has been grounded worldwide since mid-March.

In early April, Boeing CEO Dennis Muilenburg acknowledged that the MCAS system was a common link contributing to both crashes. That may expose Boeing to billions of dollars in liabilities through potential government fines, lawsuits by victims' families, and airlines' demands for compensation.

None of those costs made their way into Boeing's first-quarter earnings report, which came out on Wednesday morning. Nevertheless, the 737 MAX is already having a big negative impact on Boeing's results -- and the pain will get worse before it gets better.

Despite this sharp decline in aircraft deliveries, revenue fell just 2% year over year. First, wide-body jets typically sell for at least twice as much as narrow-bodies like the 737. Second, revenue increased 2% in the defense segment and surged 17% in Boeing's new services segment. The services division's growth was driven in part by the acquisition of aerospace parts distributor KLX Aerospace last year.

Still, the reduction in commercial airplane deliveries led to margin erosion and also hurt cash flow. As a result, Boeing reported double-digit declines for both core earnings per share and free cash flow. 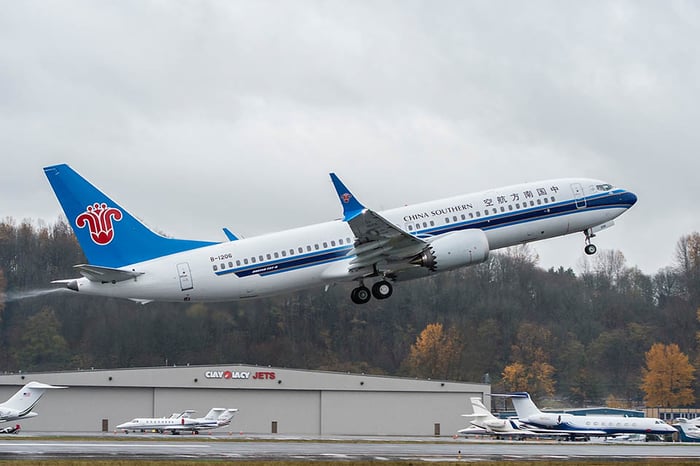 Some parts of Boeing are still healthy

The 737 MAX is undoubtedly Boeing's most important product. Thus, it should be no surprise that its grounding led to poor results for the aerospace giant last quarter.

That said, other aspects of the business continue to perform quite well. The defense and services segments -- which account for nearly half of Boeing's revenue and more than half of its operating income -- both posted revenue and earnings growth in the first quarter.

Additionally, Boeing's wide-body product lines appear to be gaining momentum. During the first quarter, Boeing won important orders for its 777X and 787 families from British Airways and Lufthansa, respectively. Additionally, it began building its 787-family jets at a faster rate (14 per month, up from 12 per month) and reported a big step-up in the profitability of 787 production, driven by an improving product mix and ongoing cost reductions.

In conjunction with the earnings report, Boeing withdrew its 2019 guidance. The company has designed a software fix -- along with cockpit changes and enhanced pilot training -- to address safety concerns regarding the 737 MAX and prevent a repeat of the recent tragedies, but it could still take months to get regulatory approval to resume commercial service with the 737 MAX. That makes it difficult to estimate how Boeing will fare on a full-year basis.

That said, investors can be fairly certain that the second quarter will be a stinker. The 737 MAX grounding is unlikely to be lifted before the end of the quarter, which means that Boeing will deliver hardly any 737s this quarter (just a handful of older-generation models). This will have a severe negative impact on its earnings and will decimate free cash flow, as Boeing will continue to build 737 MAX jets but won't receive most of the purchase price until they are delivered.

Boeing should be able to recover some of the lost earnings and cash flow later in the year once 737 MAX deliveries resume. However, the company's decision to slow 737 output will make it virtually impossible for Boeing to hit its original targets -- even leaving aside the cost of compensating victims' families and customers.

With Boeing stock still trading at a generous valuation of nearly 24 times trailing earnings, investors would probably be better off putting their money elsewhere for the foreseeable future.