Visa has a huge global presence and piles of money. Here's a look at the risks to its stock price and shareholder payout.

Visa (V -2.15%) is an immense company with a commanding presence in nearly every corner of the world. It is by far this planet's No. 1 payment card brand -- a good position given the "war on cash" currently being waged against old-fashioned means of commerce.

So it's a company that is highly profitable and has rivers of money running through its treasury. Yet no enterprise is infallible, so let's see how solid its operations are at the moment, particularly with respect to its shareholder dividend. 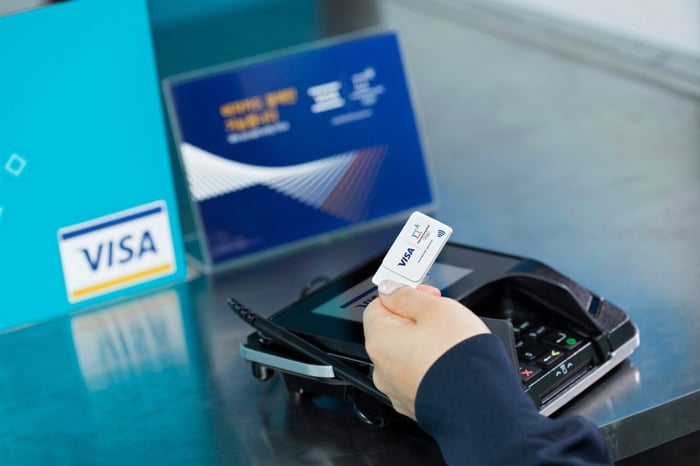 Everywhere you -- and everybody else -- want to be

Visa is far ahead of its competition in terms of sheer volume. As of the end of 2017, according to Nilsson Report statistics cited by WalletHub, it had roughly 335 million cards in circulation. That far outpaced Mastercard's (MA -2.40%) 200 million, and was leagues in front of American Express' (AXP -0.88%) 47.5 million.

Pole position is important for Visa because its success is dependent on volume. This is because it's an open-loop card payment company, meaning that it does not actually extend the credit being drawn by cardholders (in the case of its credit cards; debit card funds are drawn directly from bank accounts). Rather, the card's issuer is the one lending the dosh.

This means that Visa takes only a small cut, in the low-single-digit percentage range, of every transaction made through its card. The more purchases made on Visa plastic, the more revenue the company earns. The dynamic is similar for fellow open-looper Mastercard, but "closed-loop" operator American Express also acts as the issuer extending credit to its "members."

This high volume, combined with Visa's middleman position, means high profitability. And in these days when more people are holding and using plastic for their buys, it also means growth. In the company's Q1 it booked revenue of just over $5.5 billion, which was 13% higher on a year-over-year basis -- a very high figure for such a mature business. Net profit came in at nearly $3 billion, an 18% improvement.

Yet although Visa is a massive moneymaking machine, it isn't the most generous dividend payer. As of this writing, that quarterly payout stands at $0.25 per share, for a microscopic yield of 0.6%. Considering that the average yield of dividend-paying stocks on the S&P 500 is 1.9%, you could blindly throw a dart at a stock tote board and hit an issuer with a higher payout.

To some degree, that's understandable. Visa is on an unending mission to lengthen its lead in the payment card race. So it must constantly plow money into innovating and at least maintaining the appeal of its product. Those (accurate) "Visa Is Everywhere" ads and the many big-ticket sponsorship deals don't come cheap, either.

There's also a stock price to support, and per-share earnings figures to manage. Visa is an enormous buyer of its own stock, a tendency I've criticized it for in the past (as I don't think it sufficiently benefits shareholders). Earlier this year it authorized a whopping $8.5 billion of company money on share buybacks.

I should note that, unfortunately for income investors who like the finance sector, Visa is not alone in its miserly dividend ways. Mastercard has a similarly minuscule payout, with a yield that doesn't even reach Visa's 0.6%. And although American Express is the winner among the Big Three, it's not exactly a profligate spender on dividends with its skinny 1.4% yield.

The power of this plastic

So let's get to the question posed by our headline. Visa's business is secure -- face it, have you ever seen a card-accepting merchant that doesn't take Visa?

The company's position as the card payment brand is almost unassailable at this point. Millions of people around the world have at least one piece of its plastic stuffed in their wallets. And with the transition from cash to card ever intensifying, the company's key fundamentals should continue to grow robustly. Which in turn makes the dividend about as safe as a dividend can get.

So there's probably no need to fear for Visa's future, or that of its dividend. Both seem rock solid just now.

Visa Boosted Its Dividend: Is the Blue Chip Stock Now a Buy?
366%