Cinema legend Steven Spielberg wanted to exclude streaming services like Netflix from the Academy Awards gala. Here's how that worked out in 2019.

Cinema legend Steven Spielberg pushed hard to change the rules for the Academy Awards this year. The maker of classic movies such as E.T., Saving Private Ryan, and Jurassic Park wanted to tighten the eligibility rules in order to exclude movies made for streaming services like Netflix (NFLX 0.66%) and Amazon (AMZN 2.18%) Prime Movies.

The Academy Board of Governors had its annual meeting to review the rules yesterday, and the results are in: Steven Spielberg didn't get his way this time. 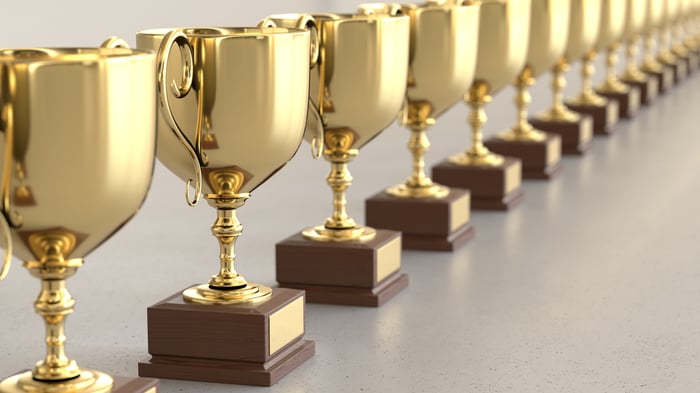 The Academy did change a few rules this week, adding more nominee slots to the Makeup and Hairstyling category and renaming the Foreign Language Film award to International Feature Film. These are all moves of earth-shaking importance for those in the biz, of course, but nothing most of us mortals will pay much attention to.

As for the eligibility framework known as Rule Two, the requirements were unchanged and remain in the form that was established in 2012. To recap, a film can be considered for the Oscars after running a week-long showing in at least one commercial theater in Los Angeles County. These screenings must be open to general admission for paying viewers and run at least three shows per day during this limited run. Crucially, movies that have appeared in some other medium -- like streaming video services -- before that theatrical run are still eligible.

"Our rules currently require theatrical exhibition, and also allow for a broad selection of films to be submitted for Oscars consideration," said Academy president John Bailey in a prepared statement. "We plan to further study the profound changes occurring in our industry and continue discussions with our members about these issues."

Nothing is stopping Steven Spielberg and other critics of the current eligibility rules from seeking a change in 2020 or in any year thereafter. All this decision means is that the Academy is kicking this issue down the road for further review. Spielberg himself simply skipped the rule-review meeting, perhaps to regroup and try again when he can drum up more support for this idea.

Meanwhile, the streaming platforms are bending over backward to get their hands on these golden statuettes. For example, Netflix is reportedly looking to buy the classic Grauman's Egyptian Theatre on Hollywood Boulevard. That's partly a PR move that preserves a historic landmark but also a savvy way to gain control over a commercial theater in Los Angeles County. Anything Netflix wants to submit for consideration under the Academy's award rules would have a guaranteed partner in that venue.

The streaming specialist and Hollywood's traditional elite will probably continue to spar for a few more years as the "profound changes occurring in [their] industry" continue to play out. Netflix is a driving force in that slow revolution, and the company takes award shows very seriously. The end result might be some sort of compromise unless the streaming services eventually manage to loosen up the existing framework. If the traditionalists manage to implement their tighter rules at some point, I don't expect that rule book to stick around for long.

The entertainment world is moving online, and Hollywood will have to follow suit one of these days. Today, the Academy simply dug in its heels and preserved the status quo. Come back in a few years to see a more open and inclusive view of what qualifies for the biggest awards show in this industry.

Sorry, Mr. Spielberg. Even legends can't always get what they want.