Tesla and NVIDIA are racing towards a self-driving-vehicle future -- but their paths have now diverged.

Musk and other leaders of his tech team spoke about the company's new self-driving computer, complete with a Tesla-designed processor. Musk said that the new tech would allow Tesla vehicles to be fully self-driving -- with no need for human input -- by 2020. He also gave more details about a Tesla robo-taxi service that would allow owners to add their vehicles to a fleet of self-driving Teslas.

But announcing all of Tesla's cool new tech wasn't enough. Musk also took the opportunity to take a few swings at Tesla's former chip supplier, and a leader in autonomous-driving technology: NVIDIA (NVDA -1.51%). 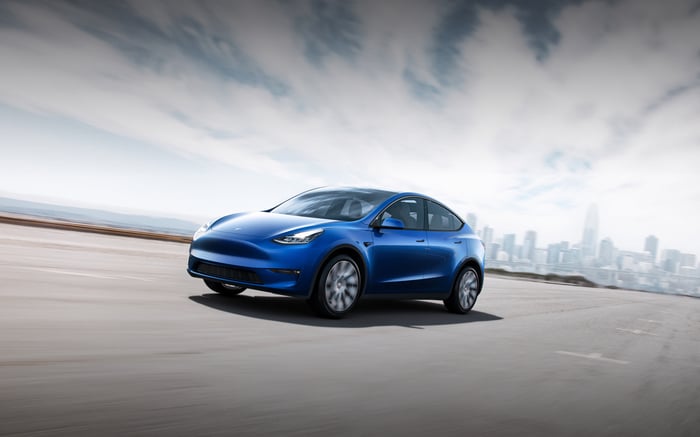 Musk and his team said the company's new autonomous-vehicle computer would be powered by CPU (central processing unit) and GPU (graphics processing unit) chips that will work with eight cameras and 12 ultrasonic sensors to enable full autonomy. The Tesla team explained that the new self-driving, dual-chip computer would deliver 144 TOPS (trillion operations per second) processing, and compared it to NVIDIA's self-driving system, which was developed with only one chip.

"At first it seems improbable. How could it be that Tesla, who has never designed a chip before, would design the best chip in the world?" Musk asked. "But that is objectively what has occurred. Not best by a small margin -- best by a huge margin. It's in the cars right now." Tesla's CEO said that the development allowed his company to drop NVIDIA's system last month.

The onstage comparison made by Tesla's sometimes controversial CEO didn't sit well with NVIDIA. Representatives for the chipmaker wrote in a blog post the next day that there were "a few inaccuracies" at Tesla's event that they needed to correct.

First, NVIDIA said, "It's not useful to compare the performance of Tesla's two-chip Full Self Driving computer against NVIDIA's single-chip driver assistance system."

NVIDIA's reps said that Tesla's two-chip computer (with 144 TOPS) should be compared to its DRIVE AGX Pegasus computer, which runs at 320 TOPS -- far greater computing power than Tesla's computer.

Additionally, NVIDIA took issue with Tesla saying that one of its chips, Xavier, only delivers 21 TOPS when it actually delivers 30. The chipmaker also clarified that its Xavier chip was never intended to power fully self-driving vehicles, but was instead designed to manage driver-assistance features.

NVIDIA admitted in its post that "Tesla is raising the bar for all other carmakers." But it also stressed that its technology is the only "open platform that's available for the industry to build on."

NVIDIA thinks Tesla is moving in the right direction with autonomous vehicles. But it also believes itself to be the only chipmaker that will be a true catalyst to help automakers create self-driving cars.

Why the Tesla and NVIDIA exchange matters

Musk is trying to make the case that Tesla vehicles have some of the most-advanced internally-created technology, and that they will soon be fully autonomous. Concurrently, NVIDIA says its alternative system is powerful enough to be the backbone for an autonomous-vehicle platform that it hopes will eventually be used by the majority of automotive makers. Both assertions can technically be true.

The two companies wouldn't usually need to name each other specifically while promoting their own technologies. But now that Tesla has dropped NVIDIA's chips, each company is trying to prove that it has the superior system.

While Musk made bold predictions about bringing fully self-driving vehicles to roads by next year, NVIDIA has been building computers to run semi-autonomous vehicles for years, and its technology is already proven. Automakers including Audi, Mercedes-Benz, Toyota, Volkswagen, and Volvo Cars are already using and testing versions of NVIDIA's semi-autonomous systems.

It's too early to tell whether Musk's predictions about his company's autonomous-vehicle future will come true. But in an industry where collaboration on technology is foundational to furthering innovation, taking swipes at a former chip supplier may not be the wisest strategy.