These stocks could drive immense gains for your portfolio.

Once thought to be the stuff of science fiction, driverless-car technology is quickly entering the mainstream. But with dozens of publicly traded companies dipping their toes in the self-driving technology pool, it's difficult for investors to identify the best ways to capitalize on the trend.

So we asked three top Motley Fool contributors to each discuss a driverless car stock they think you should be watching this month. Read on to learn why they chose Alphabet (GOOG -1.15%)(GOOGL -1.16%), Tesla (TSLA -4.39%), and Aptiv (NYSE: APTV). 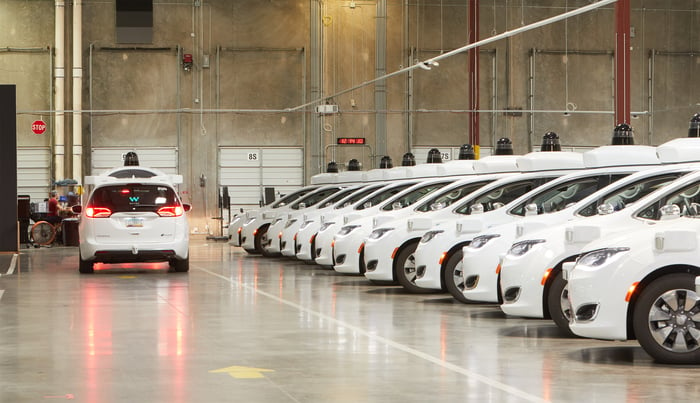 Slow and steady wins this race

Steve Symington (Alphabet): Every investor knows Alphabet primarily as the parent company of Google, and rightly so. With eight products that each have at least a billion monthly active users -- from Google Search to Gmail, Maps, Google Drive, the Play store, YouTube, Android and Chrome -- the tech giant's enviable suite of web services currently generates the vast majority of its revenue and all operating income every quarter.

But when Alphabet releases first-quarter 2019 results next week, investors should also remember those businesses help fund investments in its "other bets" segment, which houses a number of early stage (often pre-revenue) companies that could offer massive sources of incremental growth down the road. One of those other bets is Waymo, Alpahbet's drivers vehicle subsidiary.

During last quarter's conference call in early February, management lauded the December 2018 launch of Waymo One, which enables users to use an app to hail and pay for rides, as well as Waymo's recent expansion, both from a user and geographic standpoint, in the Phoenix area. Alphabet added that it's "having conversations" to bring Waymo to "a number of other interested cities," while exploring the application of its driverless-vehicle technology to the logistics and delivery markets.

Alphabet investors should listen closely next week, then, for any updates on Waymo's progress to those ends.

Anders Bylund (Tesla): It's hard to match the amount of real-world experience Tesla has amassed in the field of self-driving cars. The current fleet of Tesla cars may operate at a relatively simple level 2 out of 6, representing partial automation that still requires a human driver, but the company has a lot of wheels on the ground. Tesla had delivered more than 300,000 cars in total at the end of 2017 and proceeded to double that car count over the last five quarters. Each and every one of these vehicles is collecting actual driving data to help Tesla's engineers build better self-driving platforms for the future.

"The amount of training that we have -- if you add everyone else up combined, they're probably 5%, I'm being generous, of the miles that Tesla has. And this difference is increasing," Musk said. "[Eighteen] months from now, we'll probably have 1 million vehicles on the road [where], every time the customers drive the car, they're training the systems to be better. I'm just not sure how anyone competes with that."

Neither am I. In the race to complete automation of the driving experience, Tesla sits on an absolute treasure trove of driving data. Other companies may end up building better electric cars in the end, but those rivals may be forced to pay Tesla for a license to operate their wonderful machines with the best software packages on the planet.

In the meantime, investors are worrying about Tesla's car sales in the short term and the stock price has fallen 18% on a year-to-date basis. The self-driving expertise alone makes Tesla an interesting long-term investment at these prices, and there's much more to the story when you include energy research and actual car sales. You should ignore the short-term bumps in the road and focus on Tesla's fantastic long-term value.

One of the only driverless-car pure plays

Chris Neiger (Aptiv): Sure, there are plenty of companies betting on driverless cars, but perhaps none as much as Aptiv. With its array of sensors and software, the company is one of the only pure plays in the autonomous-vehicle market.

The company was spun off from the automotive supplier Delphi Automotive two years ago and has since been pursuing new technologies and partnerships to make driverless cars a reality. Imagine all of the specialty tech that goes into a vehicle's advanced driver assist systems -- like automatic braking and collision avoidance features -- and Aptiv's building the systems that allow them to work.

One of its most prominent partnerships is with ride-sharing company Lyft. The two companies have taken passengers on nearly 30,000 rides around Las Vegas in self-driving cars and have created one of the largest public commercial self-driving networks in the United States. Aptiv is also working with BMW, Intel, and Mobileye to create a fully self-driving car for the public by 2021.

Aptiv also makes other technologies, like over-the-air-updates, that allow today's vehicles to update their software -- and will enable the vehicles of tomorrow to become smarter and more capable than ever before.

Aptiv's revenue jumped 8% in the most recent quarter, and its earnings per share increased by 5%, to $1.34. That may seem like modest growth now, but don't overlook the company's future. More than 33 million self-driving cars will be sold annually in 2040. Aptiv is gearing up for that world now, and investors should take notice of its potential.

Buckle up and enjoy the ride

We're still in the very early stages of the driverless-vehicle story, and much can happen to change the state of the industry. But between the steady expansion of Alphabet's Waymo, Tesla's early lead building expertise in the space, and Aptiv's central position as a pure play on the market, we think astute investors would do well to at least add these three stocks to their watch lists today.