The engineering design software company continues to grow revenue in all the right places.

Another quarter and another strong set of numbers from engineering design software company Dassault Systemes (DASTY -4.93%). The European company continues to generate traction on sales of its 3DExperience platform -- more on that later -- and its overall double-digit growth aspirations remain in place for 2019. Here are the details behind another good quarter.

For reference, Dassault is based in France and reports figures in euros using International Financial Reporting Standards (IFRS). Just as U.S. companies issue non-GAAP numbers, too, in order to better represent trends in their businesses, so Dassault reports non-IFRS numbers as well.

Starting with the numbers from the first quarter:

In other words, Dassault's revenue and earnings came in at the high end of guidance -- that's not a bad result, considering all the doom and gloom that surrounded the industrial sector going into the first quarter.

It's a similar story with earnings. Management did raise the full-year earnings guidance range to 3.40 euros to 3.45 euros from a previous range of 3.35 euros to 3.40 euros , but this was a consequence of a forecast for favorable foreign currency effects of 0.05 euros in the first half.

As ever with software companies, it's a good idea to keep an eye on the development of license sales, because even though it's less than 25% of overall revenue, it's the key to future subscription and support revenue. As such, license and other software revenue was up an impressive 15% at constant currency in the first quarter, and guidance for the second quarter is for an 11% to 14% increase at constant currency.

However, management merely maintained guidance for a 10% to 12% increase in full-year license and other software revenue. 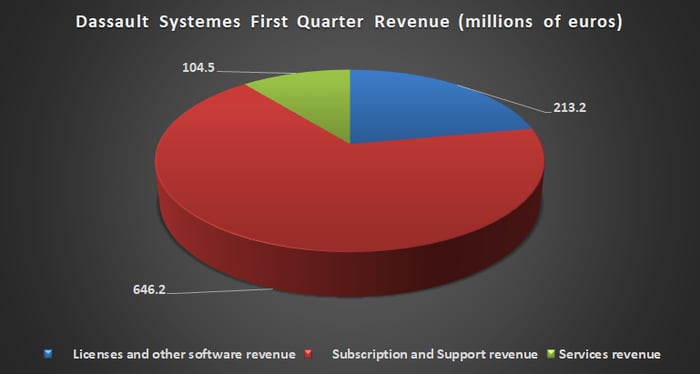 Dassault's 3DExperience platform is the key driver of its future sales growth. In a nutshell, it's a platform that allows users of Dassault's design software to collaborate with other company functions (such as design, quality control, research, and sales and marketing) on a global basis, in order to cut production costs and better develop products and solutions. The platform helps make Dassault Systemes one of the most exciting stocks to capitalize on growth in digital twin technology.

You could make the case that Dassault's full-year guidance looks conservative, but the environment remains uncertain in 2019, and if the economy slows -- particularly in Dassault's home region of Europe -- then it's likely that companies will be more hesitant to spend on software.

No matter -- current trends remain strong for the 3DExperience platform as it continues to be adopted by major corporations. That should drive license growth, and in turn, long-term revenue growth.