Expectations were muted going into Facebook's (NASDAQ:FB) first-quarter earnings report. Many investors, myself included, were fully expecting revenue growth to continue its downward trend, decelerating by the "mid-single-digit percentage" rate that management has repeatedly told shareholders to expect throughout the coming year.

Investors got a pleasant surprise Wednesday afternoon from a report that showed growth slowing, but not nearly as much as most had expected. That, coupled with unexpectedly strong profits, sent the stock soaring more than 9% in after-market trading. The stock was still doing well Thursday morning, up 6% at 11 a.m. EDT. 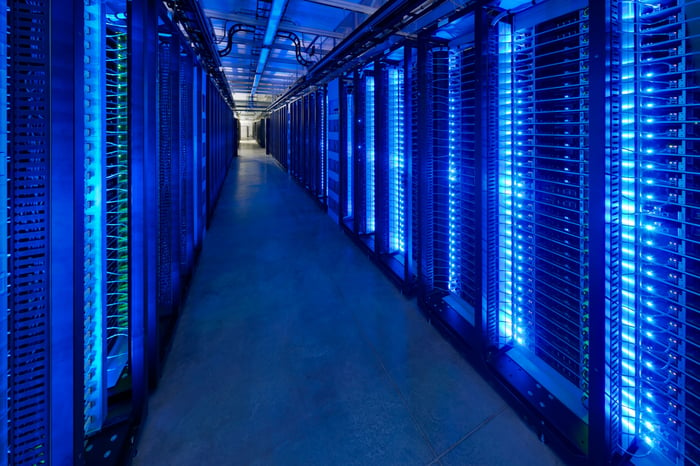 Strong results, with an asterisk

For the first quarter, Facebook reported revenue of $15.08 billion, up 26% year over year, surpassing analysts' consensus estimates of $14.97 billion. It's important to note that Facebook had forecast growth to continue to decelerate by a "mid-single-digit" percentage, so the results were slightly better than even Facebook was anticipating.

Net income of $2.43 billion declined 51% year over year, resulting in earnings per share (EPS) of $0.85. But this data requires some explanation. The results include a set aside of $3 billion for a legal expense Facebook is anticipating. The Federal Trade Commission (FTC) launched an investigation into the company's business following last year's Cambridge Analytica scandal. The probe hinges on whether the company violated an agreement with the FTC in 2011 that required Facebook to get explicit consent from users to share their data.

Some reports indicate the regulatory body is considering making an example of Facebook with a record-setting fine, though there has been no official word. "The matter remains unresolved," Facebook noted in its earnings press release. "We estimate that the range of loss in this matter is $3.0 billion to $5.0 billion."

Growth in Facebook users continued to trudge ever higher. The number of monthly active users grew to 2.37 billion, up 8% year over year, while those accessing the platform on a daily basis grew to 1.56 billion, also up 8%. More than 2.1 billion people logged into Facebook, Instagram, WhatsApp or Messenger every day, and an estimated 2.7 billion use at least one of the platforms every month.

Mobile advertising continued to produce the lion's share of Facebook ad sales, growing to $13.9 billion and up 26% year over year. It is now responsible for 93% of advertising revenue, up from 91% in the prior-year quarter.

The average price per ad decreased 4% year over year, the result of a mix shift toward Stories, and was also affected by countries that monetize at a lower rate. Ad impressions on the platform jumped 32%, driven by an increasing number of ads on Instagram, including both feed and Stories, as well as Facebook's News Feed. The average revenue per user grew to $6.42, up 16% year over year.

On the conference call to discuss the results, Facebook revealed that its three Stories experiences -- Facebook and Messenger, Instagram, and WhatsApp Status -- surpassed 500 million daily active users each.

Facebook continues to only provide broad strokes regarding its outlook. CFO David Wehner said during the conference call that the company expects revenue growth rates to "decelerate sequentially throughout 2019 ... [and] we anticipate ad targeting related headwinds will be more pronounced in the second half."

The company now expects its full-year 2019 expenses to grow in a range of 47% to 55% year over year, up from its previous guidance of 40% to 50% increased, which includes the $3 billion fine accrual (or about 10 percentage points of the expense growth).  Excluding the accrual, the company said its expense growth would be slightly below what it originally forecast.

To put the matter into the perspective of Wall Street sentiment, analysts' consensus estimates are calling for revenue of $16.38 billion, up 24% year over year, and EPS of $1.78, an increase of about 2%.

Facebook continues to perform better than investors lowered expectations, even as the company continues to reap the consequences of its actions.