The company’s price-boosting strategy comes to the low end of the market.

Graphics chip specialist NVIDIA (NVDA 5.08%) has been rolling out cards based on its newest Turing architecture for the past eight months. It began with the RTX 20 series, a set of high-end graphics cards featuring dedicated hardware designed for the computationally intensive task of ray tracing. Those pricey cards were followed by the GTX 16 series, which dropped the ray-tracing hardware and focused on mid-range and low-end price points.

The latest Turing card from NVIDIA, announced on April 23, is the GTX 1650. This $149 graphics card replaces the GTX 1050, providing up to 70% better performance for a price tag that is 37% higher. That's a better price/performance trade-off than some of NVIDIA's higher-end cards, but it continues NVIDIA's price-boosting strategy.

In this case, NVIDIA's penchant for raising prices could backfire, opening a door for rival Advanced Micro Devices (AMD 1.63%). 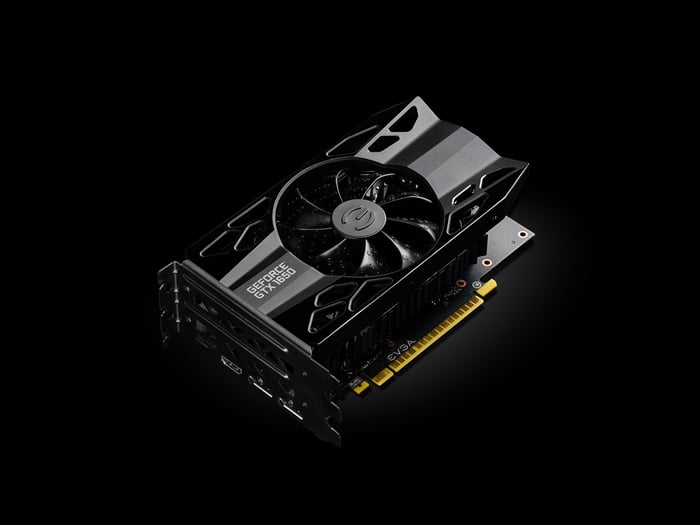 NVIDIA typically allows the news media to test its new graphics cards prior to launch, so tech-focused outlets have plenty of time to run them through their paces before they become available to the public. Not so with the GTX 1650. NVIDIA has chosen to skip that step this time around, even withholding the software drivers necessary to use the card.

AnandTech, an online publication, called this move from NVIDIA "very unorthodox (if not outright underhanded)." With reviews for the GTX 1650 starting to trickle out, it's now clear why NVIDIA chose this path.

It's not that the GTX 1650 is a bad product. It provides a huge performance boost over the previous-generation product, and it does so using very little power. It allows PC gamers to play most games at a 1080p resolution without compromising much on graphical bells and whistles.

The real problem for the GTX 1650 is the competition. By raising the price by so much, NVIDIA has launched a product that doesn't compare favorably to a two-year-old graphics card from AMD. The AMD RX 570, launched in April of 2017, outperforms the GTX 1650 in most gaming tests run by the tech site Tom's Hardware, and some models feature twice the memory. The high-memory version can be found for as little as $140, and the lower-memory version is even cheaper.

The only area where the GTX 1650 trounces the RX 570 is in power efficiency. The GTX 1650 is rated at a thermal design power of 75 watts, half that of the RX 570. The fact that NVIDIA is able to provide slightly worse performance but use half the power is a technical achievement for the company.

But in cases where that extra power consumption isn't a major factor, the aging RX 570 wins the day. Not only does it beat the GTX 1650 in performance, but it's also cheaper to boot. NVIDIA could have had a winner on its hands had it kept the price close to that of the $109 GTX 1050. But the company seems to be addicted to extracting increasing amounts of cash from its customers.

The tail-end of NVIDIA's Turing launch comes as AMD is preparing to unveil its next-generation Navi graphics cards. The company hasn't revealed much, but a focus on the mid-range of the market seems likely. With AMD's two-year-old cards standing their ground against NVIDIA's latest offerings in terms of performance and price, AMD has an opportunity to make NVIDIA's price-boosting strategy look downright foolish with Navi.

AMD has struggled to steal market share from NVIDIA over the years, so Navi being a winner is far from a guarantee. But with NVIDIA aggressively raising prices, AMD could knock the graphics chip leader down a peg or two.