AMD is hurting NVIDIA where it matters.

Advanced Micro Devices (AMD 0.32%) shares spiked big time after the company's fourth-quarter results came out in late January, which might seem a bit surprising given its lukewarm performance and outlook. AMD's top line missed expectations and its earnings simply matched up to what Wall Street was anticipating.

Moreover, the company's first-quarter revenue estimate is way behind what Wall Street was expecting. The only positive from AMD's side was that it expects full-year 2019 revenue to increase in high single digits as compared to the market's expectation of a 5.6% annual jump. So why did this moderate performance lead to such a big positive reaction from investors? Here's a possible explanation.

The bad news was already priced into AMD stock going into its latest earnings report. The company had warned investors last year that an oversupply of graphics cards would knock the wind out of its sails and bring an end to its days of rapid growth. So Wall Street was prepared for a bleak near-term outlook as AMD's retail partners are still working through elevated inventory levels as the cryptocurrency craze has waned. 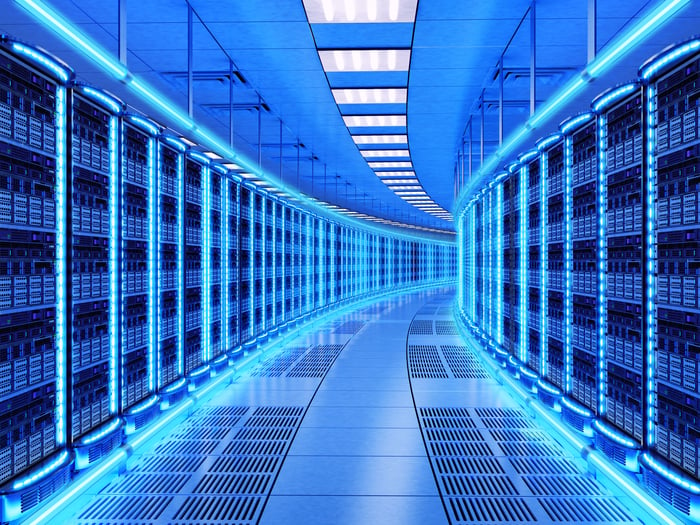 But AMD said that its graphics revenue grew sequentially thanks to "strong Radeon data center GPU sales." The statement seems to have struck a chord with AMD investors as rival NVIDIA (NVDA 2.84%) has been making waves in this segment, striking deals with major cloud and server players for its Tesla graphics cards.

But NVIDIA's latest revenue warning provides a hint that AMD could be gaining against its biggest rival. NVIDIA slashed its fourth-quarter revenue guidance to the tune of $500 million, citing weakness in the gaming and data center businesses. The company said that it saw a drop in data center deals last quarter on the back of a cautious spending approach by customers, but AMD was singing a different tune.

In fact, revenue from AMD's computing and graphics segment was up 9% year over year -- to $986 million -- despite the headwinds in the GPU (graphics processing unit) market. Analysts were originally expecting the segment to generate $939 million in revenue, so data center sales seem to have played a big role in the segment's better-than-expected performance.

AMD's smaller manufacturing process means that its graphics cards pack more computing power and consume less electricity, which is probably why it has been able to bag some big names that had been using NVIDIA chips. The likes of Microsoft, Amazon, and Baidu have signed up to use AMD's data center chips, so it isn't surprising to see AMD expects sales of Radeon data center GPUs to increase in the coming quarters.

Gaming to get back on track?

Gaming has been a sore point for both NVIDIA and AMD in recent quarters because of the cryptocurrency-related fallout, but the latter believes that this business will soon be back on track. AMD believes that sales of gaming GPUs will contribute to its overall growth this year as it brings more 7nm chips to the market.

In fact, it is quite possible that AMD could hurt NVIDIA in the gaming hardware space by launching competing products at affordable prices. Such a strategy could work in AMD's favor as NVIDIA has made its high-end cards pricier. So, if gaming enthusiasts are looking to stretch their dollar, then AMD will be the way to go.

Moreover, AMD will be pushing the envelope on the product development front by launching the 7nm Navi graphics cards from the second quarter onward. NVIDIA, meanwhile, is expected to bring its own 7nm chips to the market in 2020, giving AMD a one-year head start. The technology advantage could play massively in AMD's favor as its latest 7nm Radeon VII GPU can match NVIDIA's RTX 2080 in performance terms, according to official benchmarks, but costs $100 less.

Of course, NVIDIA packs more technology such as ray tracing, but AMD has clarified that it is working to integrate the same into its graphics cards.

In the end, market share gains over NVIDIA will be a big deal for AMD given the sway the former holds over the graphics card market. This is probably why investors are excited about AMD, because management seems to be promising progress at a time when its archrival is singing a different tune.