The chip giant's problems are getting worse.

Shares of Intel (INTC 3.85%) tumbled on Friday following a first-quarter report that beat expectations but featured a weak outlook for 2019. The data center business suffered a sales decline to start the year, and the company now sees that business declining for the full year as well. The stock was down about 10.1% at 12:10 p.m. EDT.

Intel reported first-quarter revenue of $16.06 billion, flat compared to the prior-year period and $70 million above the average analyst estimate. The client computing group grew by 4.5% to $8.59 billion, but the data center group slumped 6.3% to $4.90 billion. Nonvolatile memory was also a weak spot, with revenue down 12% to $915 million due to a difficult NAND pricing environment. 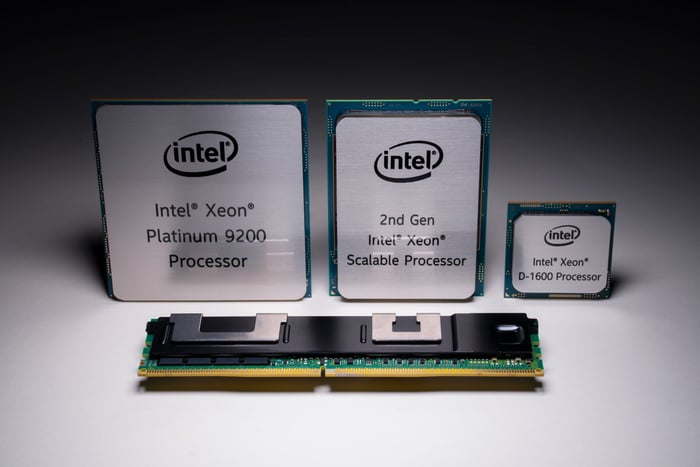 In the data center group, unit volumes were down 8% year over year, with average selling prices up just 1%. Data center unit volumes tumbled 17% from the fourth quarter of 2018.

Intel is dealing with a range of issues that forced it to cut its outlook. CEO Robert Swan said during the earnings call that the decline in memory pricing has intensified, suggesting that the bottom is nowhere in sight. Swan also said that the ongoing data center inventory correction is more severe than expected, and that increasing China-related headwinds have led to a more cautious IT spending environment.

This guidance assumes that overall data-centric revenue will be down a low single-digit percentage in 2019, with revenue in the data center group down a mid-single-digit percentage. Intel also expects the NAND pricing environment to become more challenging. The company will also be facing increased competition from Advanced Micro Devices in both the PC and server markets as that company launches new products later this year.

Intel still expects some improvements in the second half, although a robust rebound now looks out of the question. With Intel's data center growth engine sputtering, it's not surprising to see the stock taking a big hit.