The online marketplace is growing more quickly than management had predicted just a few months ago.

Things are looking up for eBay's (EBAY 1.82%) business in 2019. The e-commerce marketplace giant this week announced first-quarter earnings that were strong enough to convince management to boost its full-year sales and profit outlooks. The success likely took some heat off of CEO Devin Wenig and his team as they respond to pressure from activist shareholders who are agitating for the sale or spinoff of key parts of the business.

In an investor presentation published along with the earnings announcement, executives provided context for the latest results and detailed their updated -- and brighter -- outlook for 2019. Here are a few highlights from that presentation. 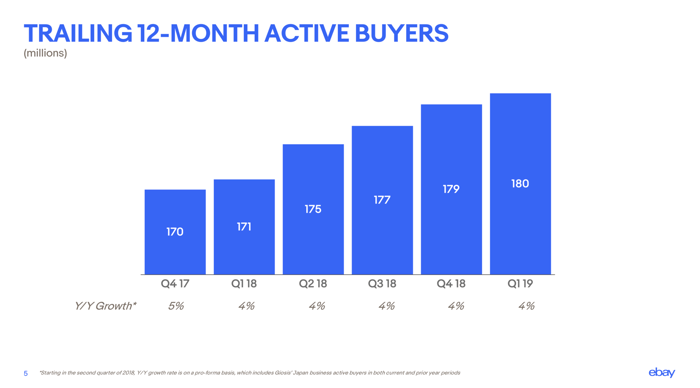 eBay's core marketplace is still struggling in some areas but notched improving growth trends over the last few months. The pool of active buyers continued to grow at the same 4% rate investors have seen for more than a year, which has been a slight slowdown from 2017's consistent 5% expansion. The company continued to see worsening sales volumes, too, with gross merchandise volumes slowing for the third consecutive quarter and falling into negative territory .

However, those results outperformed management's conservative forecast, in part thanks to an increase in seller fees. Overall, eBay's sales growth landed at 4% to comfortably exceed the 0% to 2% range executives issued back in late January. 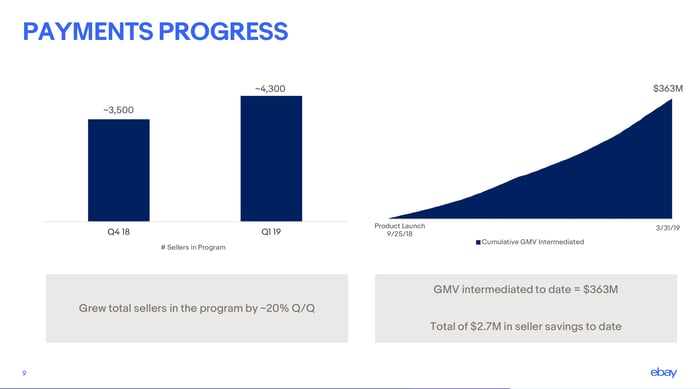 eBay is aiming to lean on two new business lines, payments processing and advertising, to take up the slack from slower growth in the core marketplace segment. There was plenty of good news for investors on this score. eBay revealed that the payments business grew 61% to pass $220 million. The plans for quickly scaling the service are moving along, with Germany now set to be its second large market.

The advertising unit is also off to a good start, with 800,000 active sellers powering a doubling of revenue to $65 million. Yes, both businesses are still tiny relative to the almost $2 billion of marketplace revenue that eBay books each quarter. But their soaring growth rates and large addressable markets imply they could soon begin making significant contributions to the broader business. 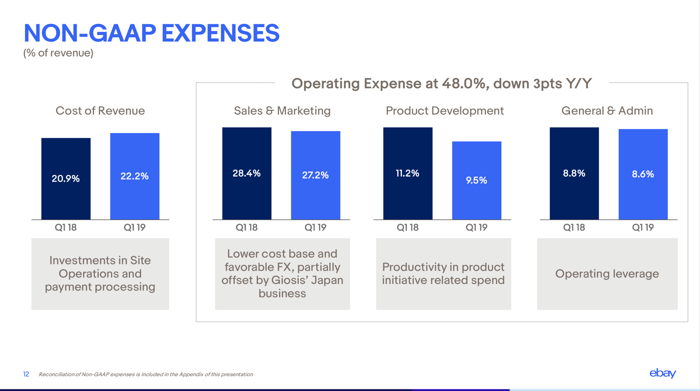 eBay's biggest wins in the quarter arguably came from its discipline around expense management. Spending fell as a percentage of sales in each of its biggest operating categories to push non-GAAP operating expenses down to 48% of sales from 51% a year ago. As a result, operating margin improved to 30% of sales compared to 28%.

Market-leading profitability has always been a key part of the eBay investment thesis, since its asset-light approach to e-commerce lets it earn many multiples of the below-5% margin of vertically integrated rivals like Amazon and Walmart. This quarter's progress demonstrates that management has the ability to widen that financial lead even if eBay isn't growing volumes at nearly the rate that these peers are enjoying today.

Looking ahead, eBay now sees organic growth reaching between 2% and 3% this year. While that would mark the second straight year of deceleration from the 7% boost investors saw in 2017, it's still better than the 0% to 2% rate executives had forecast just a few months ago.

eBay's earnings profile is looking stronger, too, thanks to contributions from the faster sales growth, higher transaction fees, and reduced costs. Combine those favorable trends with aggressive stock repurchase spending, and non-GAAP earnings per share could grow by as much as 16% to $2.70 this year.