Disney is reportedly in talks with the NFL for the Sunday Ticket package.

For the last 25 years, NFL fans who wanted to watch whichever games they wanted on Sunday afternoon had to subscribe to DirecTV and the NFL Sunday Ticket package. But it seems the NFL and AT&T (T -0.25%), DirecTV's parent company, are having a bit of a falling out. AT&T recently removed the NFL Network from its pay-TV services in response to the NFL shopping around the Sunday Ticket package to other distributors.

One distributor reportedly in talks with the sports league is Disney (DIS -0.15%). The media company might use the all-you-can-watch football buffet to attract subscribers to ESPN+, its direct-to-consumer sports streaming service. Disney expects to grow the service to anywhere from 8 million to 12 million subscribers by 2024. It already has 2 million subscribers, and is growing fast.

Stealing away the NFL from AT&T could push Disney across the goal line, but not without a massive investment. 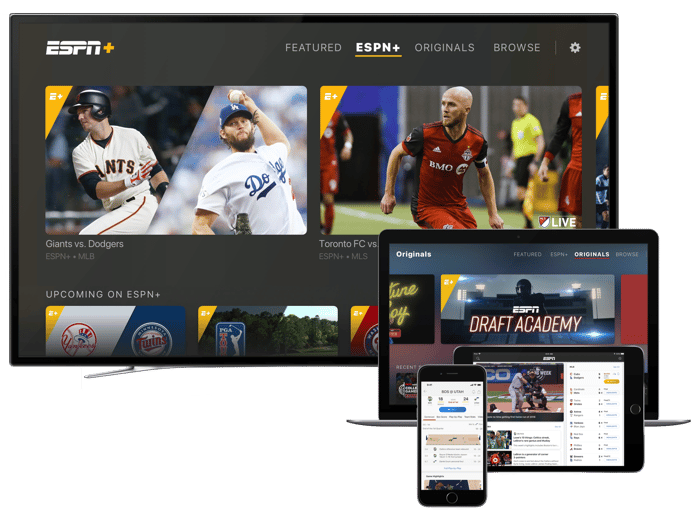 Programming on ESPN+ and the various ways to get it. Image source: ESPN

The NFL is expensive

The package also includes the ability to watch games you missed, condensed games (only the action), and other perks like being able to follow your fantasy team. DirecTV pays about $1.5 billion per year for the rights.

That's a hefty price for ESPN+. The package attracts only about 2 million subscribers via DirecTV, who pay around $300 per year. That's just $600 million in revenue -- a $900-million-per-year loss leader that DirecTV can use to sell its expensive television service. AT&T's television subscribers pay over $120 per month on average; ESPN+ costs just $5 per month.

ESPN should be able to sell more subscriptions

There's the potential for Disney to attract more NFL fans to the package than DirecTV could. The satellite TV service presents a major barrier for a lot of fans who don't want to install a satellite dish on their roof or pay the high monthly price for the requisite television package.

Disney could offer a package of ESPN+ and Sunday Ticket for just $350 per year (the annual price of both services combined). Still, it would likely need to attract about 5 million subscribers just to break even if the NFL's price stays the same as five years ago. (Hint: It won't.)

Disney has several channels through which it can market an ESPN+ and Sunday Ticket package.

There are a couple of million subscribers already signed up for Hulu's live TV service, who present an excellent target audience. Additionally, ESPN broadcasts Monday Night Football, which is yet another opportunity to reach football fans who might be interested in a relatively inexpensive Sunday Ticket. Generally speaking, ads throughout ESPN's properties ought to be more cost-effective than DirecTV's marketing efforts, considering ESPN only has to worry about opportunity cost.

Moreover, strong integration with ESPN's fantasy sports operations could provide a massive boost to subscriptions. ESPN hosts the No. 1 fantasy sports platform with over 20 million unique users. Fantasy football players are a prime audience for the Sunday Ticket package, and ESPN could use its technology to make it easy for fans to follow their fantasy roster throughout the day and get live updates.

If Disney pursues the NFL Sunday Ticket package, it will likely provide a massive boost to its subscriber sign-ups. That said, it will require the company to update its plans for ESPN+, because 8 million to 12 million subscribers by 2024 won't cut it if it's paying more than $1.5 billion per year for the premium NFL package.

The NFL can't opt out of its deal with AT&T until next season, so the earliest fans could potentially subscribe over-the-top is in the fall of 2020.