Quarterly net sales declined 3% year over year to $689.2 million -- though that was well above analysts' consensus estimates for $645 million -- and they would have increased 1% had it not been for the negative effects of foreign-currency exchange. On the bottom line, that translated to a net loss of $183.7 million, or $0.53 per share, an improvement from the $0.90 per share loss recorded a year earlier and beating expectations by roughly $0.03 per share. 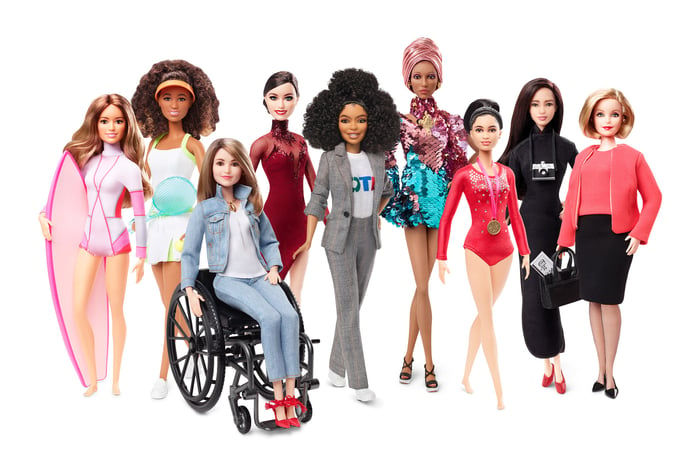 Harnessing the power of legacy brands

Perhaps most surprising, however, was that much of Mattel's relative strength came from several of its legacy product lines.

Barbie sales, for one, enjoyed constant-currency growth of 13%, with the 60-year-old brand effectively propping up the company's core Dolls segment -- which represented nearly a third of total gross sales during the quarter -- even as revenue from its more contemporary American Girl dolls declined. Meanwhile, Hot Wheels -- a brand first introduced more than 50 years ago -- delivered 9% constant-currency growth, easily outperforming the 2% growth achieved by the broader Vehicles category and helping offset declines from toys based on Pixar's animated CARS film franchise.

In fact, Mattel COO Richard Dickson noted during the subsequent conference call that this marked Barbie's sixth straight quarter of year-over-year growth, helped by buzz surrounding events for the iconic character's 60th anniversary. And Hot Wheels not only just finished with its highest-ever sales to start any year but also recently became the No. 1 boys' toys channel on YouTube.

Strong brands are only part of the solution

Mattel still has plenty of work to do before it recaptures sustained, profitable growth. Through the company's previously announced "structural simplification" initiatives, Mattel has already achieved $610 million of annual run-rate cost savings, but it also expects to exceed its original goal of $650 million in savings by the end of this year. During the call, management reminded investors this turnaround is nowhere near complete, either.

Mattel chairman and CEO Ynon Kreiz, for one, called it a "multiyear comprehensive effort" that includes optimizing their manufacturing, plant infrastructure, and supply chain operations, adding that the company should see the fruits of this new "capital light model" by next year.

"I want to emphasize that while we have been making significant cost improvements, we've been very mindful of protecting and enhancing the commercial and creative capabilities of the company," Kreiz elaborated. "It is evident that our strategy to become an IP-driven, high-performing toy company is demonstrating tangible results."

In the meantime -- and despite its relative outperformance to start 2019 -- Mattel merely reiterated its previous full-year guidance for gross sales to be roughly flat at constant currencies.

CFO Joe Euteneuer justified Mattel's caution by noting that not only does the "vast majority of the year" remain, but the company expects to lose around $30 million to $35 million in sales from its voluntary recall earlier this month of nearly five million Fisher-Price Rock 'n Play Sleepers.

That explains why after initially soaring nearly 11% on Friday morning, Mattel stock all but gave up its gains as the day wore on to close down 1%. But it's hard to fault the company for choosing safety over profits, and I think investors should be more encouraged than anything by the strength of Mattel's enviable legacy product portfolio in helping drive its turnaround forward.