With this aging bull market bumping up against its record highs, you might think that it's flat-out impossible to find any stocks with compelling valuations right now. However, there are still a few rare gems in this overheated market that should appeal to even dyed-in-the-wool value investors.

How do you spot the best value stocks? Many elite investors screen for top value stocks using the price-to-earnings-growth ratio -- or PEG ratio for short. The key advantage of this particular financial metric is that it takes a company's growth potential into account. By doing so, the PEG ratio provides a more complete picture of a stock's intrinsic value compared to less nuanced metrics such as the price-to-earnings or price-to-sales ratios. In practice, value investors are typically on the hunt for stocks with PEG ratios under 1, which implies that a company's shares are trading below its presumed growth rate. 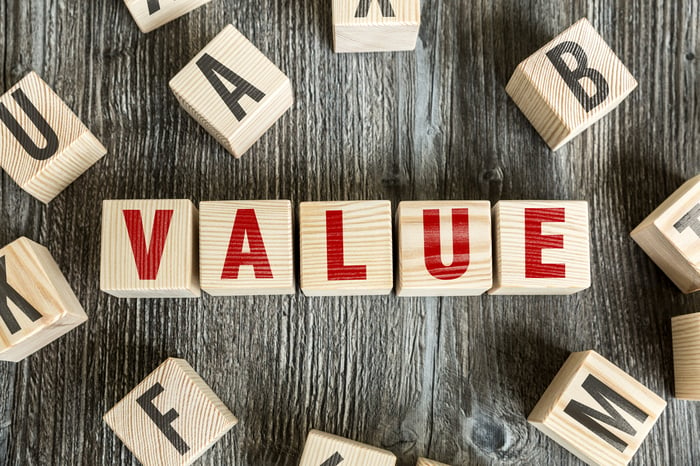 Which stocks meet this criteria? In the high-growth pharmaceutical space, the cancer drugmaker Exelixis (NASDAQ:EXEL) and the central nervous system drug specialist Supernus Pharmaceuticals (NASDAQ:SUPN) both stand out as attractive value plays from a PEG ratio perspective. Here's a brief rundown on why value investors might want to consider these names right now.

Exelixis: Ready to take the next step

With a PEG ratio of 0.44, Exelixis is one of the absolute cheapest commercial-stage biotech stocks right now and also one of the most undervalued cancer companies in the market today. Wall Street's main  knocks against Exelixis are the company's uncertain competitive position and its lack of a robust drug discovery engine. However, these two key risk factors appear to be weighing far too heavily on Exelixis' valuation.

What's the scoop? Exelixis' flagship cancer medication cabozantinib -- sold under the brand names Cabometyx and Cometriq -- has slowly but surely evolved into a bona fide blockbuster candidate. In 2012, the company grabbed its first indication for cabozantinib as a treatment for medullary thyroid cancer. Four years later, Exelixis was able to tack on a later-line kidney cancer indication to the drug's label, and most recently, the Food and Drug Administration further expanded its label to include patients with advanced liver cancer.

Taken together, these various indications are expected to push the drug's sales over the $2 billion mark at some point in the next decade -- despite stiff competition for both of its two biggest markets -- kidney and liver cancer, respectively. Cabozantinib's rising sales and strong future prospects should thus enable to company to rebuild its clinical pipeline, whereby creating deep value for current shareholders.

What's the bottom line? Eventually, Wall Street should start to warm up to this grossly undervalued cancer stock in response to cabozantinib's multibillion-dollar commercial opportunity. As a result, value investors might want to get ahead of this rising tide by buying some shares now.

Supernus' PEG ratio of 0.43 is also near the bottom of the barrel for a healthcare stock in general and a pharma stock in particular. Normally, this kind of bargain-basement valuation is reserved for companies with serious fundamental flaws. In this case, however, the market is simply assigning next to no value to the company's lead clinical asset.

The breakdown is that Superus currently markets two epilepsy drugs called Oxtellar XR and Trokendi XR. Although the company's epilepsy franchise has been growing at a healthy pace and this upward trend is forecast to continue for a few more years, Wall Street is clearly nervous about the commercial viability of Supernus' late-stage clinical pipeline.

The main issue is the mixed trial results for Supernus' attention deficit hyperactivity disorder candidate known as SPN-812. While the drug's quick onset and encouraging safety profile could be major advancements over currently available therapies, Wall Street isn't convinced that these advantages will be enough to overcome the availability of cheap, generic versions of Eli Lilly's Strattera.

What's next? Supernus is slated to apply for SPN-812's regulatory approval in the U.S. in the back half of this year. If approved and the drug is adopted by the bulk of payers within a reasonable time frame, Mizuho pharma analysts think SPN-812 could achieve peak sales of around $600 million. That's a big payday for a company on track to generate less than $550 million in total sales next year.

All told, Supernus' stock is cheap anyway you slice it. The company's epilepsy drugs are arguably more than enough to support a higher valuation based on their double-digit growth prospects and SPN-812 should provide at least some upside in the years to come. Therefore, bargain hunters may want to take a deeper dive on this undervalued stock before the market starts to wake up to this reality.