An intermediate gold producer based in Canada, Pretium Resources (NYSE:PVG) is expected to report its first-quarter earnings on May 3. With the company's lone asset, the Brucejack mine, beginning its second full year of mineral production, Pretium believes 2019 will be even more lustrous than 2018. Considering the company's bold forecast, investors will surely be paying close attention to Pretium's Q1 earnings report to assess whether management has overestimated its prospects for the coming year.

Analysts estimate Pretium will report revenue of $95 million and earnings of $0.08 per share, but savvy investors know that a company's quarterly performance transcends only two metrics. So, let's dig in a little deeper and see what we can expect management to address when it reports earnings. 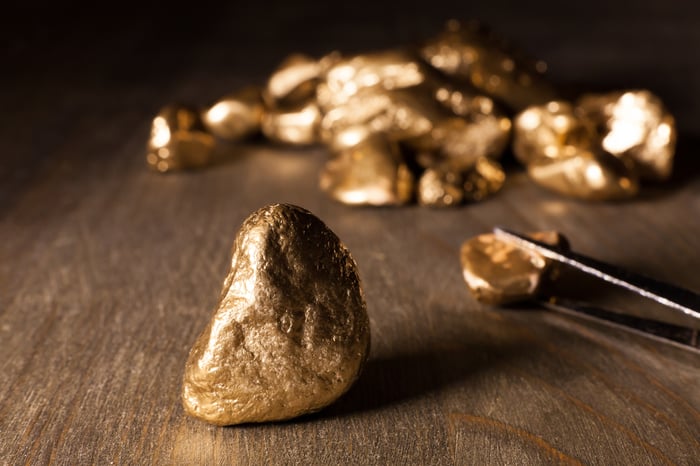 Reporting gold production of 376,000 ounces in 2018, Pretium foresees this rising to 390,000 to 420,000 ounces in 2019. To achieve this, though, management estimates that the company will have to ramp up production to 3,800 metric tons per day by the end of the year -- a notable increase over the daily average of 2,755 metric tons it reported in 2018. In the first quarter, however, investors can expect it to report production of about 3,000 metric tons per day. Similarly, Pretium forecasts an average gold grade of 10.4 grams per metric ton in 2019; however, this is forecast to be weighted toward the second half of the year. Investors, consequently, can expect a grade below 10.4 grams per metric ton for the first quarter.

Before the company can boost production, it will have to complete several upgrades. On the company's Q4 2018 conference call, Joseph Ovsenek, Pretium's president and CEO, identified these improvements, which include "mill upgrades, the expansion of the underground development to the west and east and at the depth." While the company experienced some scheduled shutdowns during the quarter, and it hasn't issued its final numbers for the period, Ovsenek seems optimistic that it will hit the target of 3,000 metric tons per day. On the conference call, he stated that at the end of January the company was averaging production of 3,300 metric tons per day.

...and a costly road at that

While Pretium's 2019 AISC forecast, an escalation over last year's, may seem disconcerting for some, those familiar with the company's Brucejack life of mine plan -- identifying a total life of mine AISC of $539 per gold ounce sold -- may deem the 2019 forecast downright disastrous. In either case, investors should take a second and bear in mind that management has included about $15 million in one-time sustaining capital expenditures, which translate to $40 per gold ounce in the 2019 AISC forecast.

Demonstrating Brucejack's auspicious outlook even further, management forecasts the average annual operating cash flow for the mine will equal $350 million. For this year, however, the company expects to generate $209 million in cash from operations. Since gold production is expected to be weighted toward the second half of the year, the company will likely report operational cash flow below $50 million for the quarter. While the exact figure is less important, investors can look for management to reaffirm its annual forecast.

Pretium has articulated an interest in rewarding shareholders, but they'll have to wait until 2020 and beyond, when management expects to allocate $40 million annually for dividends and share buyback. Prior to that, Pretium intends to strengthen its financial health by lowering its debt. In 2019, for example, the company plans on deploying $140 million from its operational cash flow to debt reduction.

What's at stake for Pretium

While I'm interested to see how Pretium fares in ramping up its production, I'm more curious about commentary related to the gold grade. According to a short report issued by Viceroy Research Group, Pretium has overestimated the gold grade at Brucejack, thereby raising doubt as to whether the asset can be as lucrative as Pretium suggests. Reporting gold grades in line with its estimates can go a long way toward allaying the concerns of investors shaken by the critical report.