The chip company will need to convince investors that it can grow this year despite a terrible first quarter.

Advanced Micro Devices (AMD 1.68%) will report its first-quarter results after the market closes on Tuesday, April 30. Excess GPU inventory stemming from the cryptocurrency bust will wreak havoc on the company's results, sending revenue and earnings down substantially, but AMD still expects to grow revenue in 2019 thanks to the strength of its Ryzen and EPYC CPUs.

AMD began to feel some pain from the cryptocurrency bust in the fourth quarter, with lower GPU sales offsetting much of the company's growth in other areas. The result was sluggish revenue growth but a solid improvement to profitability.

AMD's computing and graphics segment, which contains its PC CPUs and GPUs, produced $986 million of revenue in the fourth quarter, up 9% year over year. Sales of AMD's Ryzen CPUs were strong, with the company reporting a 50% increase in client processor unit shipments on a year-over-year basis. But GPU sales tumbled due to elevated levels of inventory, pushing down the segment's growth rate. GPUs aimed at the data center sold well, but it wasn't enough to offset general GPU weakness. 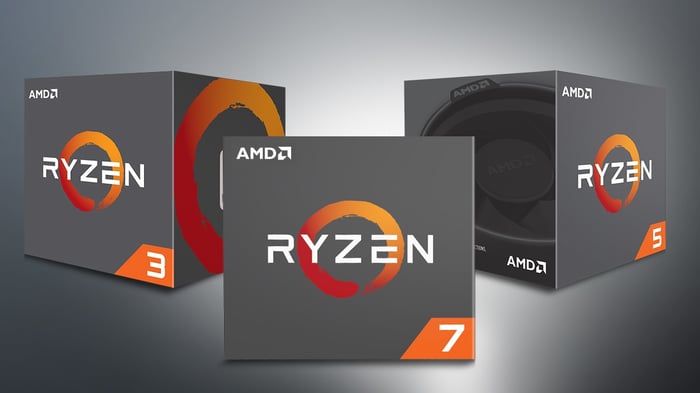 Weak demand for GPUs will hit AMD much harder in the first quarter. The company is expecting a steep revenue decline.

A combination of excess channel GPU inventory and the absence of GPU sales related to cryptocurrency will drive down AMD's revenue. The company also expects its semicustom revenue to decline on a year-over-year basis.

The good news is that sales of Ryzen, EPYC, and data center GPU products are all expected to increase in the first quarter. That will help AMD hit its target for a non-GAAP gross margin of 41%. The bottom line will also benefit from an expected $60 million IP licensing gain.

Despite a very weak first quarter, AMD still sees revenue growing by a high single-digit percentage in 2019. AMD will launch its third-generation Ryzen desktop products in the next few months, along with second-generation EPYC processors and its new Navi GPUs sometime this year. The company will need to rack up market share gains from Intel in the CPU market and NVIDIA in the GPU market to grow sales this year.

One wrinkle in AMD's plan could be weak data center demand. Intel warned last week that it had underestimated the severity of the data center downturn, forcing it to cut its full-year guidance. Intel expects its data center group to post a revenue decline this year after years of robust growth.

AMD's guidance for the second quarter, and whether it reiterates its full-year guidance, will likely be the driving forces behind any post-earnings stock moves. If AMD disappoints, perhaps because the GPU downturn is more severe than expected, the stock's recent gains could vanish.