It's a good company, but is its stock priced too high?

As investors, we have to be careful when a stock has a dramatic run-up in price. Take mighty payments processor Visa (V -0.08%): It's risen by more than 24% so far this year alone, and has doubled since early 2017.

That's a fast ascent. So let's zoom in a bit on Visa's operations and its current valuation, and see whether it's still worth buying today. 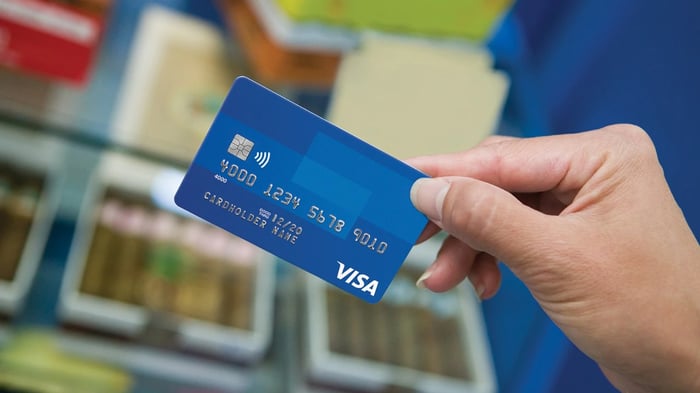 We're several offensives into the War on Cash, in which the world is abandoning greenbacks and other currency to pay by card or digital means. This conflict turned in favor of non-cash in 2016, when the global amount of payments by card/digital means exceeded that of bills and coins for the first time, according to researcher Euromonitor.

Not surprisingly, as the top brand in the world by cards outstanding, Visa has seen a pronounced upward trend in the number of transactions processed on its network over the past few years. All told, this amounted to 124 billion worldwide in fiscal 2018, up from 111 billion the previous year and 83 billion in 2016 (Visa's fiscal year ends in September).

As volume goes, so go the company's results. Visa's past few quarters have shown quite robust growth on both the top and bottom lines. Its recently reported second quarter was typical for its recent performance -- revenue rose by 8% on a year-over-year basis to $5.5 billion, with earnings per share advancing 17% to $1.31.

It's saying something that those results were more or less in line with analyst estimates. In other words, prognosticators who follow Visa foresee double-digit growth on a regular basis.

We never get tired of reminding our readers that, as the old warning goes, past performance isn't predictive of future results. With that caveat in mind, I feel confident that Visa still has plenty of growth in front of it. The War on Cash isn't going to reverse in favor of bills and coins, and Visa is the company leading the Army of Plastic.

With Visa Checkout, it's also dipped its toes in the digital payments pool. On top of that, Visa holds a small stake in next-gen payments company Square (SQ 0.52%).

So as the prevalence of non-cash transactions continue to rise, so should Visa's fundamentals. Analysts are projecting continued double-digit growth -- on average, according to Yahoo! Finance, they expect that revenue will rise 11% this fiscal year compared with 2018. Per-share net profit should increase by 15%.

Note that those numbers are higher than the most recent quarterly growth figures.

So let's get to the valuations to determine if the stock is well priced.

The anticipated forward price-to-earnings ratio for the stock is just over 26. When compared with that 15% EPS growth estimate, it suggests the shares are overvalued.

This apparent overvaluation is not unusual for a popular finance-sector company. Fellow highflyer Square's forward P/E is judged to be about 65 and change, against an expected 57% EPS rise this year.

Yet valuations aren't everything. The global economy and general payment trends are well in Visa's favor (as they are for Square, but that's an article for another time). As one of the generals leading the War on Cash, Visa's got nowhere to go but up, so I'd anticipate more than a few years of continued growth.

I also believe Visa will remain a highly popular stock with both institutional and individual investors. It's a high performer and likely to remain so. Valuations say one thing; my intuition whispers another. Looking past the numbers, Visa still feels very much like a buy for me.

My 3 Favorite Warren Buffett Stocks to Buy for 2023