Please ensure Javascript is enabled for purposes of website accessibility
Log In Help Join The Motley Fool
Free Article Join Over 1 Million Premium Members And Get More In-Depth Stock Guidance and Research
By Matthew DiLallo - Apr 29, 2019 at 10:32AM

The natural gas and NGLs pipeline giant will unveil its results after markets close on Tuesday.

ONEOK (OKE 1.87%) is coming off an exceptional 2018. The pipeline company's fourth-quarter results were right on target, helping cap a year in which earnings and cash flow surged more than 20% and 30%, respectively.

This year, however, is unlikely to be quite as strong due to the timing of the company's growth projects. Those expansions are among the things that investors should keep an eye on when the natural gas and NGLs midstream company reports its first-quarter results later this week. 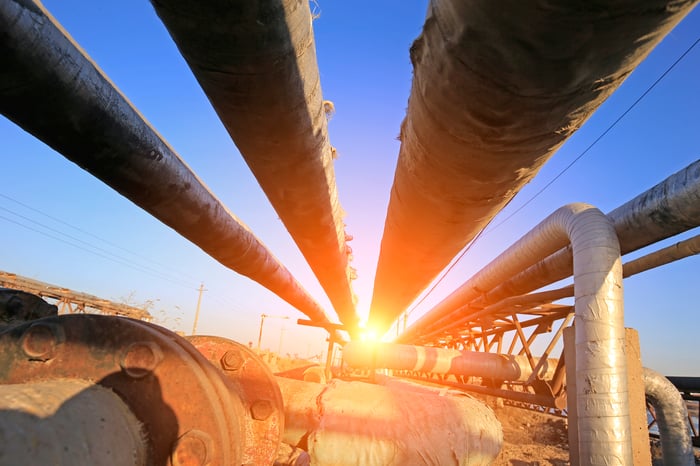 1. Keep an eye on project execution

In ONEOK's Q4 report, CEO Terry Spenser stated that "2019 will be a year of project execution." As a result, the company only anticipates earnings growing by 6% this year, since the bulk of its expansions won't enter service until later in the year and early 2020. That timing, however, should reaccelerate earnings in 2020, when the company forecasts 20% growth.

Given that outlook, investors should watch the progress of its expansion projects. In particular, they should look for any updates on the Elk Creek Pipeline, a $1.4 billion natural gas liquids (NGLs) line that it's building from Montana to Kansas. ONEOK's current forecast is that it will finish the southern portion as early as Q3, and complete the entire line by year's end. Another important 2019 project is its $400 million Demicks Lake I natural gas processing plant, which will help supply Elk Creek with NGLs when it comes online in Q4. Delays in either project could negatively impact the company's near-term growth prospects.

2. See if higher oil prices will provide a boost

WTI crude oil prices, which spent most of the first three quarters of 2018 in a $65 to $75 range, crashed by 40% at the end of last year. Because of that, most U.S. drillers planned to reduce their spending and activity levels for 2019. That will result in them drilling fewer wells, which would impact the volumes flowing through ONEOK's pipelines.

Crude prices, however, have bounced back sharply this year, rising from the low $40s to the mid $60s. Because of that, drillers could ramp up spending on new wells. That would enable them to produce greater volumes of associated natural gas and NGLs, which would in turn fuel higher earnings for ONEOK as that production flows through its systems. On top of that, rising oil prices tend to drive NGL prices upward as well, which would boost margins. Those two factors could enable ONEOK to revise its guidance upward, which bears watching this quarter.

3. Look for additions to its expansion program

ONEOK has secured more than $6 billion of growth projects since June 2017. Those expansions have the company on track to deliver strong earnings growth in 2020 and 2021 when they come online. The company has further potential expansions in early stages of development. Those could extend its growth forecast further into the future if it successfully secures them.

On last quarter's conference call, Spencer noted that his company continues "to evaluate additional opportunistic projects that address customer needs and the increasing demand for NGLs and natural gas in the U.S. and abroad." He pointed out that one project in particular , a potential NGL export facility, "has received a lot of attention."

"What I can say is that we're closer to a deal now than we've ever been, but there are a number of details that still need to be worked out before we announce anything further," he said. "We're optimistic about where we are in the process and believe this facility would be a great fee-driven addition to our already predominantly fee-based business model." Given those comments, investors will want to know if the company was able to push this project (or others) across the finish line and into its backlog.

All eyes on what's ahead

ONEOK is in the middle of a major expansion phase that should reaccelerate its earnings growth next year. Because of that, the focus for investors this quarter will be on its progress in completing those projects. However, the company could offer shareholders some unexpected good news if recovering oil prices provide a boost or it secures additional expansions. If all three of those potential catalysts arrive, ONEOK's stock price could bounce sharply.