Oil prices bounced back sharply during the first quarter. That benefited Oceaneering International (NYSE:OII) by fueling more demand for its offshore products and services during the period, which enabled it to deliver stronger results. Because of that and its increasingly optimistic view of what lies ahead, the company boosted the low end of its guidance range.

Three of Oceaneering's five segments stood out during the quarter: 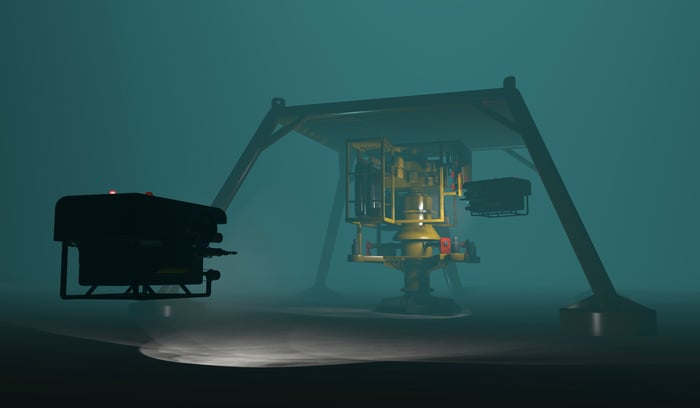 CEO Rod Larson commented on the quarter by stating that: "We are very pleased that our first-quarter results exceeded expectations. Higher-than-expected activity and good execution within our energy-focused businesses were key factors in achieving this performance."

After several years, the offshore drilling market is finally starting to improve. Oil companies approved several new drilling projects in recent months, which is driving activity levels higher as well as sales of offshore-related products. One area where that's noticeable is in Oceaneering's ROV segment, where utilization and rates continue to improve as more drilling rigs go back to work.

Oceaneering expects continued improvement in its ROV, subsea projects, and advanced technologies segments during the second quarter. That should more than offset the expectation for flat sequential results at subsea products and asset integrity. Meanwhile, the company anticipates that subsea projects' activity levels will accelerate during the second half of 2019 based on the orders it has taken in so far this year. Those factors, along with its better-than-expected first-quarter results, led the company to narrow its guidance range for adjusted EBITDA. It now foresees that number coming in between $150 million to $180 million, a $10 million increase at the low end from its initial view.