Please ensure Javascript is enabled for purposes of website accessibility
Log In Help Join The Motley Fool
Free Article Join Over 1 Million Premium Members And Get More In-Depth Stock Guidance and Research
By Daniel B. Kline - Apr 30, 2019 at 5:09AM

The country's largest retailer implied that it could offer a deal similar to the e-commerce leader's. But should it?

Amazon (AMZN -5.26%) changed the e-commerce game when it quietly let it be known that it planned to turn its two-day free shipping perk for Prime members into a one-day free shipping perk. That shift, in some ways, took rivals including Walmart (WMT -6.33%) and Target (TGT -26.05%) from being on roughly the same playing field as the online retail giant to being a big step behind.

The question for those major competitors is, should they try to offer one-day shipping on most products as well? That will likely prove a major logistical challenge, given that both companies struggled to match Amazon's two-day standard. It could be argued that it would make more sense for the chains to lean into their brick-and-mortar footprints and leverage the advantages of having a physical presence, rather than trying to keep up with Amazon on its virtual home turf.

Walmart has certainly been working toward that strategy with its omnichannel transformation, but the company has also made it clear that it takes Amazon's plan as a challenge. Walmart management hasn't offered any specific or firm plans in response yet, but the company did provide a clue about its thinking in a bold Tweet.

One-day free shipping...without a membership fee. Now THAT would be groundbreaking. Stay tuned.

Should Walmart try to compete?

Walmart's dig at Amazon was a pointed reference to the difference between their free shipping strategies. While Amazon Prime members pay $119 a year and get free shipping regardless of the value of the order, Walmart charges no annual fee, but its free two-day shipping only applies to orders over $35. The larger difference is that Prime's free shipping deal applies over 100 million items while Walmart's includes just a few million.

It's possible that Walmart could one-up Amazon by offering free one-day shipping (still without a membership fee) for orders that meet certain parameters. That, however, seems like an expensive proposition when the chain could instead build on its strengths -- the fact that it has nearly 5,000 stores in the U.S.

"The truth is many retailers can go one better: they can offer same-day pickup from stores," wrote GlobalData Managing Director Neil Saunders on RetailWire. "It's more cost effective for them, and many consumers actually prefer it to delivery."

Walmart's embrace of the omnichannel model has led it to introduce in-store rapid-pickup kiosks and curbside pickup in many markets. It may choose to work on improving those options, rather than to attempt the expensive logistical nightmare of trying to offer one-day shipping for free.

"Amazon is not so fortunate," Saunders added. "It doesn't have stores that can fulfill in this way, so it has to enhance its delivery options for core customers. That's going to come with a hefty price tag, albeit one Amazon can afford." 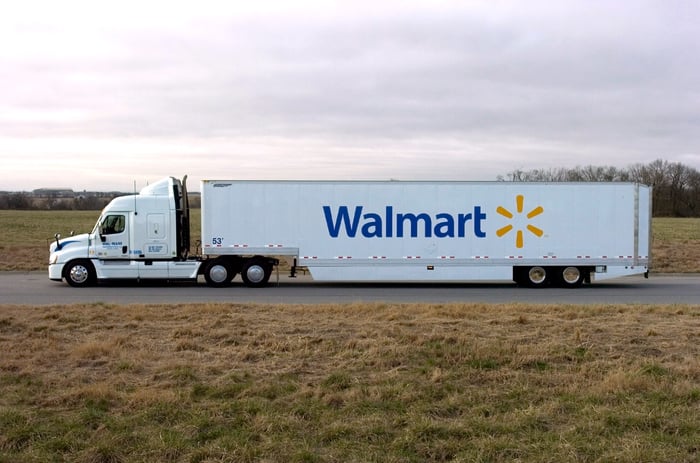 It may not make sense for Walmart to offer one-day shipping. Image source: Walmart.

Is Walmart making a mistake?

Fundamentally, Amazon needs to enhance its same-day offerings because it lacks a brick-and-mortar operation. For some consumer needs, it simply can't compete with the fact that people can simply get in their cars and drive to a store.

Walmart made a valiant effort to match Amazon on the two-day shipping front (albeit with fewer items). It may not need to continue trying to keep up. It's entirely possible that its customer base will consider two-day shipping fast enough for items they want to have delivered, and be willing to go to a store for things they want or need faster.

To compete, Walmart should focus on improving its in-store experience, and on making the "buy online, pickup in store" option as easy as possible. It should also consider going back to experimenting with same-day delivery (something Target has been expanding), and really focusing on the areas where it has a clear edge over Amazon.