It's no secret that younger Americans are more supportive of marijuana legalization. It appears that they're pretty upbeat on marijuana stocks, too.

The free investing app Robinhood is especially popular with millennial investors, which consist of individuals born between 1981 and 1996. Of the five most widely held stocks on Robinhood, two of them are pot stocks -- Aurora Cannabis (NASDAQ:ACB) and Cronos Group (NASDAQ:CRON).

Robinhood doesn't speculate publicly on why millennial investors seem to like Aurora and Cronos so much. However, there are three likely reasons behind these two marijuana stocks' popularity with younger investors. 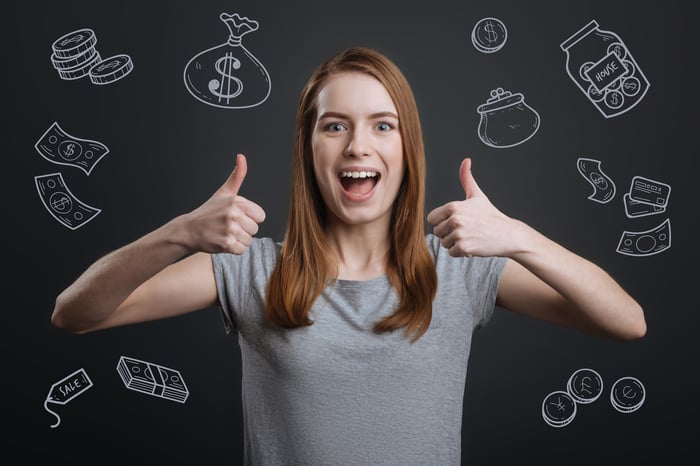 One important thing to note is that Robinhood only supports buying and selling stocks that are listed on U.S. exchanges. Stocks that trade over the counter or on exchanges in other countries aren't available.

Currently, there are only six pure-play pot stocks that trade on the New York Stock Exchange (NYSE): Aurora Cannabis, Aphria, Canopy Growth, CannTrust Holdings, Innovative Industrial Properties, and HEXO (which trades on the NYSE American stock exchange.) A handful of stocks with significant financial interests in the cannabis industry are also listed on the NYSE, including Altria, Constellation Brands, and Scotts Miracle-Gro.

Overall, only nine pot stocks are available on the two major U.S. stock exchanges. That makes the odds for Aurora and Cronos to be selected as the top picks by millennials trading on Robinhood much less daunting than they would otherwise be.

Aurora became much more well known to U.S. investors late last year when rumors floated that Coca-Cola could be interested in partnering with it. Although no deal materialized, the stories definitely gave Aurora some great publicity. Since then, the company has benefited from headlines related to its bringing billionaire investor Nelson Peltz on board as a strategic advisor to line up potential partners outside of the cannabis industry.

Cronos jumped into the limelight in December 2018 with the announcement that Altria was investing $1.8 billion in the company for a 45% stake. That deal helped make Cronos one of the three best-performing Canadian marijuana stocks last year.

There are other things that set Aurora and Cronos apart from the pack, too. Aurora's production capacity stands at the top of the industry. The company also leads in international medical marijuana markets, a factor that's likely to become increasingly important.

Now that the transaction with Altria has closed, Cronos Group has a sizable cash stockpile that it can use for expansion. Its relationship with the tobacco giant will be another big plus in establishing successful global brands. In addition, Cronos has a partnership with Ginkgo Bioworks to develop high-purity cannabinoids from genetically engineered yeast strains. The technology used in this approach has the potential to dramatically lower the costs associated with cannabinoid production.

Of course, Canopy Growth also has tremendous production capacity, substantial international operations, and a big partner. Why isn't it as high on the list with millennial investors as Aurora and Cronos are? Probably the best answer is that younger investors might think the stock's market cap of $18 billion already reflect these positive factors.

Greater popularity on the way?

Aurora is now a darling among analysts while Cronos isn't. But both stocks could gain popularity this year among analysts and investors, including millennials.

There's a decent chance that Aurora could find a major partner outside of the cannabis industry with Nelson Peltz actively working on its behalf. The right deal could make Aurora's share price soar.

Cronos Group now has Altria joined at its hip and a boatload of cash. Should the company expand into the U.S. (perhaps by moving into the U.S. hemp market) or make a significant acquisition that boosts its production capacity, look for the stock to jump.

The most popular stocks aren't always necessarily the best stocks to buy. But in the case of Aurora Cannabis and Cronos Group, you can at least understand why millennials like these two pot stocks.