Please ensure Javascript is enabled for purposes of website accessibility
Log In Help Join The Motley Fool
Free Article Join Over 1 Million Premium Members And Get More In-Depth Stock Guidance and Research
By Brian Orelli, PhD - May 1, 2019 at 2:29PM

Despite the biotech's move into gene therapy, its bread and butter are still paying the bills.

BioMarin Pharmaceuticals (BMRN -0.09%) started the year with a slow first quarter coming in under its 15% growth target, but management still feels like the company is in a good position to hit its previously announced 2019 revenue guidance, with sales of Palynziq ramping up and lumpy sales of its other drugs eventually averaging out. 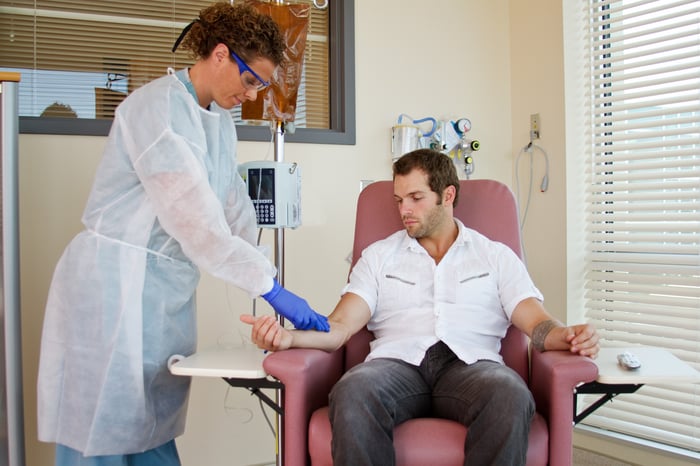 The most important thing out of the three-year update is the bleeding data. And the two reasons for that are: one, that's the clinical morbidity of a patient's experience, it's what cost the healthcare system a lot of money, it's going to be what payers care a lot about. That's not to say that they won't care about other things, but for sure they're going to care about bleeding rate data. And so, what I think about that is little to no bleeding in the third year is going to be great.

BioMarin plans to file an application to start clinical trials for a second gene therapy, BMN 307 for PKU, but CEO Jean-Jacques Bienaime told investors that it wasn't abandoning the development of other types of therapies that have gotten the company to where it is now, saying, "Although gene therapy is a very important component of BioMarin in the future, at this time, we are not planning on turning into a gene therapy company."

Management reaffirmed its 2019 revenue guidance of $1.68 billion to $1.75 billion. The company thinks it can hit its 15% revenue goal again next year, putting in on track for approximately $2 billion in revenue in 2020. At that point, valrox and vosoritide, which treats a genetic disorder that results in dwarfism called achondroplasia, will hopefully both be approved and can accelerate growth.

An update on the long-term valrox data should be released shortly before the June 7 deadline for submitting the late-breaker abstract to the International Society on Thrombosis and Haemostasis annual meeting. Later in the year, BioMarin plans to make a decision about whether to apply for accelerated approval for valrox using a subset of the data or just wait for the full data for a full approval.