Please ensure Javascript is enabled for purposes of website accessibility
Log In Help Join The Motley Fool
Free Article Join Over 1 Million Premium Members And Get More In-Depth Stock Guidance and Research
By Timothy Green – May 1, 2019 at 5:03PM

Revenue is soaring as the software company moves upmarket.

Customer service software provider Zendesk (ZEN 0.26%) reported its first-quarter results after the market closed on April 30. Revenue grew by nearly 40%, but Zendesk moved further away from profitability on a GAAP basis. New products like its Sunshine CRM offering, as well as efforts to bundle software and to win larger customers, should keep revenue growing at a quick pace. 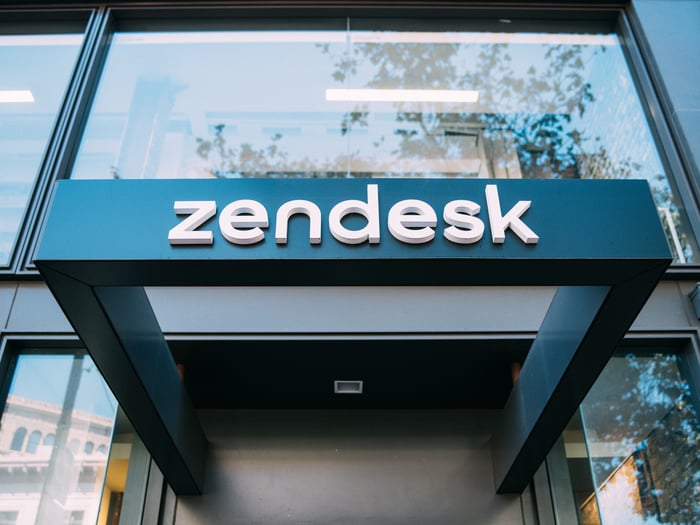 Zendesk CEO Mikkel Svane talked about the company's success bundling multiple products during the earnings call: "The Suite now has more than 3,500 paid customers as of the end of the quarter. It's a joy for customers who increasingly want omnichannel solutions and they, of course, helps us drive bigger average deal size by combining multiple products into the Suite."

Svane also talked about Sunshine, the company's new CRM offering: "It's still early days of Sunshine, but we are encouraged by the very positive reception and the many initial customer projects we're working on. We believe Sunshine clearly sets us apart because it's built in the public cloud on AWS."

So just as a reminder, we still have a lion share of our book of business in monthly terms with us. So, just keep that in mind. They are not really reflected in our RPO. So, that's an important distinction there. I think the drivers of RPO really have to do with a focus on building longer-term commitments with our customers and that's really a high priority for the sales org and that's an important way to continue to grow our enterprise customers.

Zendesk provided the following guidance for the second quarter:

Zendesk also updated its outlook for the full year:

On a GAAP basis, the already-negative bottom line is sinking further as Zendesk invests in new products like Sunshine and focuses on winning larger enterprise customers. Those efforts are driving robust revenue growth, and the company expects to keep growing fast throughout 2019.

John Mackey, CEO of Whole Foods Market, an Amazon subsidiary, is a member of The Motley Fool's board of directors. Timothy Green has no position in any of the stocks mentioned. The Motley Fool owns shares of and recommends Amazon and Zendesk. The Motley Fool has a disclosure policy.