Acquisitions are a touchy subject for investors, as few companies can pull them off successfully. AT&T (T -1.51%) purchased DirecTV for $48 billion in 2015; then spun it off for a measly $16 billion this year. Investors had few thoughts occupying their mind besides a disaster like that when Zendesk (ZEN) announced it was acquiring Momentive Global (MNTV 1.65%), the parent company of Survey Monkey.

The acquisition is on shaky ground

It takes a bit of imagination to realize how Zendesk will integrate Survey Monkey into its product suite. Zendesk provides customer service software, a sales platform, and even has a solution for employees to contact their employer's help desk. Surveys don't seem to fit that niche. 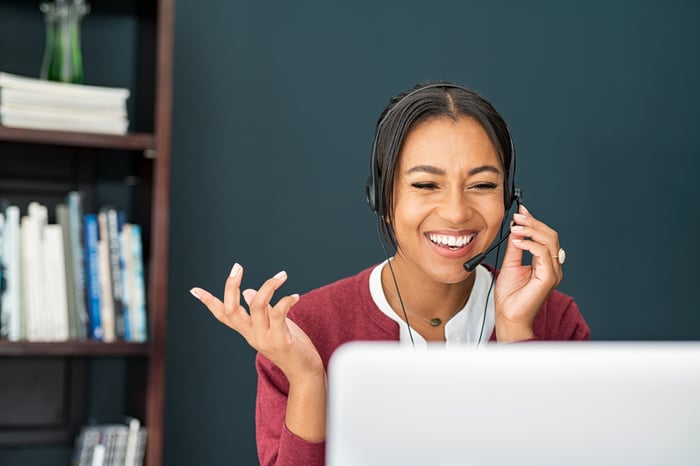 Zendesk's CEO and founder Mikkel Svane said the company is going to "create a powerful new Customer Intelligence company" to "deliver a rich, colorful picture of every customer so businesses understand their customers and can build more authentic relationships." By understanding the customer, Zendesk will arm its users with powerful information to bolster sales and improve service. The key to this acquisition is opening a new revenue stream, not augmenting the existing ones. Zendesk sums up the acquisition by saying it "responds to what customers say and do," where Momentive "captures how customers think and feel." After being enlightened by Zendesk's plans, does this acquisition still makes sense?

Momentive's buyout price isn't cheap. Zendesk is forking over $28 per share, valuing Momentive at around $4.1 billion. This works out to a price-to-sales (P/S) ratio of 10, which is not crazy in this market. However, with Zendesk's market cap hovering around $12.5 billion, the Momentive acquisition would make up a quarter of the company.

Further complicating matters, Legion Partners opposes the deal. Legion owns 1.4% of Momentive and wants to do anything it can to stop the transaction. While Legion wanted Momentive to look into selling, it believes Momentive did not shop itself around enough. Shareholders still need to confirm the acquisition, so Zendesk still may end up empty-handed.

Further complicating the situation was Zendesk's third-quarter results, as the acquisition and quarter were announced on the same day, Oct. 28. Revenue growth was strong and continued to accelerate for the fourth consecutive quarter.

Zendesk also issued fourth-quarter revenue guidance of $366 million to $372 million, representing 30% growth, and potentially setting the stage for a fifth quarter of revenue growth increase with a small revenue beat. Its net expansion rate also grew to 122%, citing a 22% year-over-year decrease in discontinued plans as the catalyst.

The company remains unprofitable on a net income basis, but does produce free cash flow when stock-based compensation is pulled out. This brings up another issue with both the acquisition and Zendesk; Zendesk has been diluting its share count since going public. Over the last five years, Zendesk has increased its share count by around 5% each year. Much like how inflation decreases how much a dollar can buy, each share now owns less of the company when Zendesk issues new shares for acquisitions, to raise capital, or to pay employees. Because Zendesk plans to pay for Momentive with stock, the dilution will hurt shareholders even more.

Time to buy Zendesk on sale?

Since releasing news of its acquisition plans, Zendesk's stock has plummeted about 15%. Even worse, it now sits at nearly 35% below the 52-week high. Investors may be excited about Zendesk's growth prospects, but not so much about the combined company. If the deal gets rejected and Zendesk's shares fall further, it may be a good time to purchase a position. However, investors will need to trust Zendesk that the acquisition is in its best interest provided it goes through. Trust has indeed been a winning strategy, as Zendesk has risen nearly 650% since its IPO in 2014. However, the Momentive acquisition may be the last straw for some shareholders.