Please ensure Javascript is enabled for purposes of website accessibility
Log In Help Join The Motley Fool
Free Article Join Over 1 Million Premium Members And Get More In-Depth Stock Guidance and Research
By Eric Volkman – Updated May 2, 2019 at 5:00PM

I grabbed this stock as a young(er) man, and have held it ever since. But would I buy it fresh today?

Quite some years ago, I bought a clutch of TD Ameritrade (AMTD) stock. I've generally been happy with its performance, but few investments are reasonably priced forever.

Over the course of the long bull market we're in, TD Ameritrade's stock price has risen notably -- it's up by 80% across the past three years, although it's down from its 2018 peak. Given all that, would the Eric of the past invest in the shares today? Hmmm... 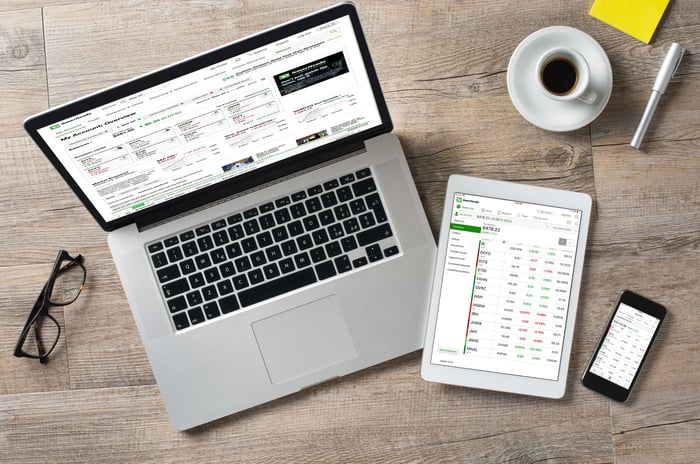 Happily for TD Ameritrade, the many exchanges its clients can trade on have recently been very busy and chock-full of volume, particularly at the tail end of last year. We should always keep in mind that for brokers, it doesn't really matter whether the markets rise or fall; volume is the key, since they (usually) make a few dollars for every trade.

However, such fees have been a headwind for the traditional brokers. A fee war that erupted in 2017 saw rival brokerages Fidelity and Charles Schwab (SCHW -1.06%) cut their trading commissions, sparking a round of fee reductions throughout the industry.

Compared with its peers, TD Ameritrade made a narrower cut, but it still effectively left money on the table.

Also, this left it and fellow slicer E*Trade Financial (ETFC) as relatively expensive traders; their $6.95 (a starting rate, in E*Trade's case) is well higher than the $4.95 charged by both Schwab and Fidelity.

It's possible to go even lower. Privately held Robinhood charges exactly $0 per trade, for example. A recent swimmer in the deep discount pool is mighty bank JPMorgan Chase, which last year announced its first 100 equity trades for clients would cost that ever-popular $0 each.

So it was little wonder when TD Ameritrade, plus publicly traded competitors Schwab and E*Trade, saw their share prices erode from their mid-2018 highs.

Beating the analysts and the markets

That share price retreat -- and the slow recovery from it -- has left the broader brokerage sector a good bargain, in my opinion. And TD Ameritrade is one of the better deals.

The company has been growing its revenue, albeit at modest rates. The top line rose 2% to $1.45 billion in this year's first quarter. Adjusted net profit saw a more dramatic increase of 26% to $522 million.

In terms of operating metrics, TD Ameritrade has managed to grow, or at least hold steady where it counts.

Its March tallies for total client assets and, more encouragingly, fee-based balances held by its customers exceeded the rise in both the S&P 500 and the Dow Jones Industrial Average (DJIA) on a year-over-year basis. If we're going purely by trading volume, the DJIA's March figure was actually down 23% compared with that of March 2018.

The number of funded accounts was also up over that stretch of time, rising by 4%.

As a shareholder, I find it encouraging that TD Ameritrade's growth in these facets of its business is coming in higher than that of its key equity markets. It's also happening in spite of the lower trading volume of a crucial index.

This also tells me the company is good at attracting new clients and keeping existing ones. And these clients aren't overly concerned that their trades cost $2 more -- or even $6.95 more, in some instances -- than those made through competitors.

Meanwhile, in terms of valuations, the stock trades at a price-to-earnings growth (PEG) ratio of slightly over 1 -- the point at which many analysts believe a stock is fairly valued (Schwab's and E*Trade's PEG ratios are also around 1).

Finally, TD Ameritrade has been a steady and reliable dividend payer for years. Its current quarterly distribution is $0.30 per share, which shakes out to a yield of 2.4%. That exceeds both Schwab's 1.6% and E*Trade's 1.2%.

TD Ameritrade is an effective and trusted broker and manager of money. It has benefited from frothy markets and will continue to do so if they remain vibrant. But it isn't cripplingly dependent on them being ultra-busy. If I were approaching the stock fresh today, it would be a buy for me.