Please ensure Javascript is enabled for purposes of website accessibility
Log In Help Join The Motley Fool
Free Article Join Over 1 Million Premium Members And Get More In-Depth Stock Guidance and Research
By Rich Smith – May 2, 2019 at 2:32PM

An earnings beat is no beat at all when it means earnings this bad.

Shares of Kellogg Company (K 1.48%) stock dropped 5% in early trading Thursday, despite the cereals giant reporting revenues that broadly met expectations and earnings that beat expectations for its fiscal first quarter 2019. As of 2:15 p.m. EDT, Kellogg's decline had moderated to about 3.1%.

Sales met expectations at just over $3.5 billion for the quarter and were up 3.5% year over year. Expected to earn $0.95 per share (pro forma) for the quarter, Kellogg reported that it earned $1.01 per share. 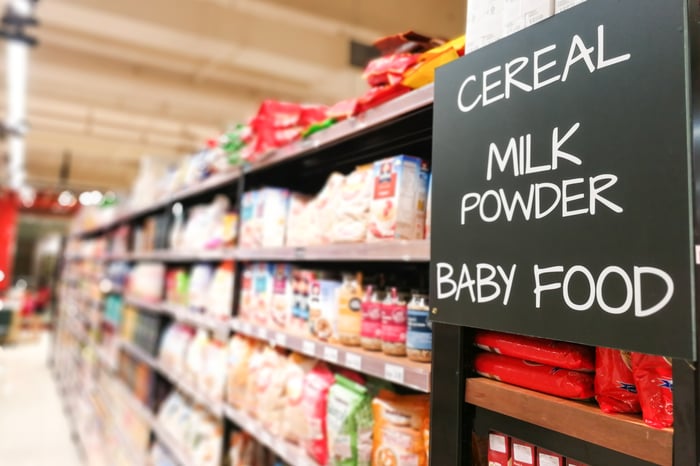 That's the good news. The bad news is that, as calculated according to generally accepted accounting principles (GAAP), Kellogg's GAAP earnings were only $0.82 per share and were thus down 35% in comparison to last year's Q1. (Pro forma profits declined 18% -- still not a great result.)

As announced in April, Kellogg plans to sell off "selected cookies, fruit snacks, pie crusts, and ice-cream cones" in a deal expected to close in late July. Management updated its guidance to incorporate the likely effect of these divestitures:

For context, analysts had been expecting to see earnings decline only about 8% this year, to $3.97 per share. Thus, it seems likely the new, lower guidance is in part to blame for Kellogg's sell-off today.