Please ensure Javascript is enabled for purposes of website accessibility
Log In Help Join The Motley Fool
Free Article Join Over 1 Million Premium Members And Get More In-Depth Stock Guidance and Research
By Brian Feroldi – May 3, 2019 at 2:15PM

First-quarter results missed the mark, but traders are feeling upbeat because this company's backlog continues to grow.

In response to reporting of strong first-quarter results, shares of ViewRay (VRAY), a medical equipment company that sells the MRIdian Linac system, jumped 15% as of 2:00 p.m. EDT on Friday.

Here are the key numbers from the quarter:

Management reaffirmed its guidance for the full year. That guidance calls for total revenue to land between $111 million and $124 million, while total cash usage is expected to be in the range of $65 million to $75 million. 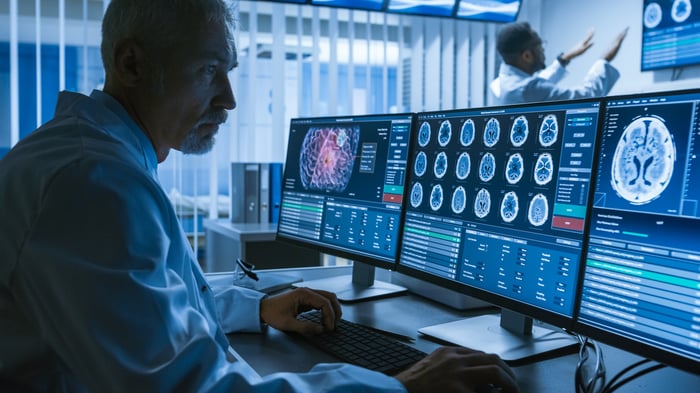 Traders appear to be focusing their attention on the strong MRIdian system sales and are willing to look past the weak quarterly results.

It takes a long time to sell and install a MRIdian system, so it makes sense that the company's quarterly results will fluctuate wildly from time to time. For that reason, it makes sense to judge this company's performance on a full-year basis.

If ViewRay can hit the midpoint of its full-year revenue guidance, the company will produce top-line growth of about 45% this year. That's quite strong in absolute terms, but it is still nowhere close to allowing the company to become profitable.

ViewRay remains an exciting growth stock today, but since this business is still burning through capital, it remains exceptionally risky. For that reason, my plan is to monitor this company's progress from the safety of the sidelines.