Please ensure Javascript is enabled for purposes of website accessibility
Log In Help Join The Motley Fool
Free Article Join Over 1 Million Premium Members And Get More In-Depth Stock Guidance and Research
By Matthew DiLallo – May 3, 2019 at 5:05PM

TransCanada (TRP -3.05%) is in the midst of a building boom to help increase the flow of oil and natural gas across North America. The Canadian energy infrastructure company placed another 5.3 billion Canadian dollars ($4 billion) of expansion projects into service during the first quarter; combined with the CA$4 billion ($3 billion) it finished last year, this helped fuel strong growth during the quarter. That trend should continue, since the company expects to complete even more expansions by year-end.

TransCanada delivered record financial results during the first quarter. The company continues to benefit from its diversified portfolio of energy infrastructure assets, as three of its five business segments fueled growth in the quarter: 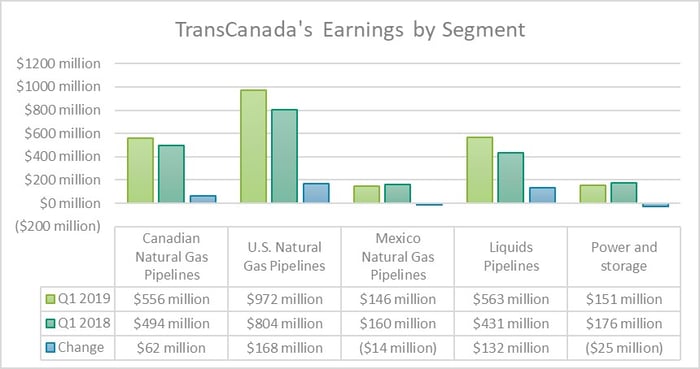 The Canadian gas pipeline segment delivered solid results as earnings rose 12.6% year over year, thanks to higher rates on the Canadian mainline and NGTL systems. Meanwhile, recently completed expansion projects on both Columbia Gas and Columbia Gulf helped fuel a 20.9% jump in earnings at TransCanada's U.S. gas pipeline segment. The final growth driver was liquids pipelines, where earnings leaped 30.6% thanks to higher volumes on the Keystone Pipeline system and increased profits from the company's liquids marketing activities.

Those positives more than offset weaker earnings at TransCanada's gas pipelines in Mexico, as well as power and storage (formerly its energy segment). The timing of when it recorded revenue was the main issue weighing on earnings in Mexico, while asset sales and additional costs from a delay in completing the Napanee power plant impacted the power and storage business. 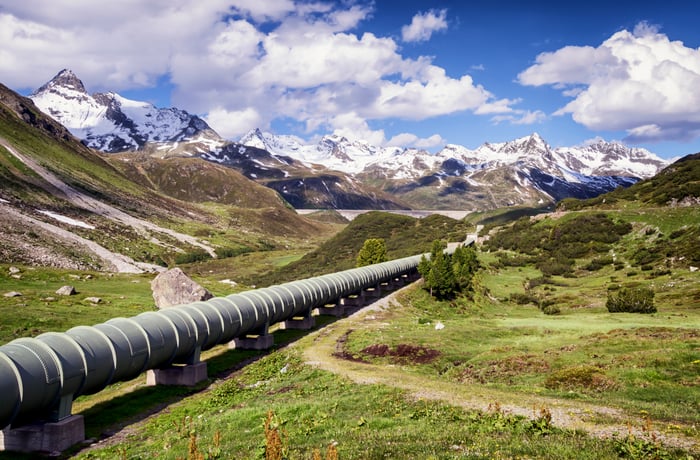 "With the demand for our existing assets driving historically high utilization rates and [CA]$30 billion [$22.3 billion] of secured growth projects underway, approximately [CA]$7 billion [$5.2 billion] of which are expected to be completed by the end of the year, earnings and cash flow are forecast to continue to rise," said CEO Russ Girling. He further noted that "these projects are supported by regulated or long-term contracted business models that are expected to support annual dividend growth of [8% to 10%] through 2021."

The CEO also noted that the company made good progress in obtaining the funding needed to complete its expansions. It has already invested CA$10 billion ($7.5 billion) into its projects, and expects to use a combination of retained cash flow (after paying its dividend) and other means to finance the rest of its projects.

It has already taken steps to bridge the gap by agreeing to sell the Coolidge power plant, and is looking to sell up to a 75% stake in its Coastal GasLink pipeline project to offset more of its funding needs. These moves "allow us to prudently fund our capital program in a manner that is consistent with achieving targeted leverage metrics, including debt-to-EBITDA in the high [4] times area, in 2019 and thereafter and deliver ongoing growth as measured on a per-share basis."

The company also continues to slowly advance more than CA$20 billion ($14.9 billion) of additional growth projects, including the Keystone XL pipeline and Bruce Power's Life-Extension Program. Girling noted that "success in progressing these and other growth initiatives that are expected to emanate from our five operating businesses across North America could extend our growth outlook well into the next decade."

Set up for long-term success

TransCanada -- soon to become TC Energy -- is reaping the benefits of its expansion program, which generated strong earnings growth in the first quarter. The company expects that to continue for the next several years, given the number of projects it has under construction and in development. That makes it an excellent income growth stock to hold for the long haul.