Please ensure Javascript is enabled for purposes of website accessibility
Log In Help Join The Motley Fool
Free Article Join Over 1 Million Premium Members And Get More In-Depth Stock Guidance and Research
By Lou Whiteman - May 3, 2019 at 10:03PM

Shares of Allegiant Travel Co. (ALGT 3.60%) climbed 13.4% in April, according to data provided by S&P Global Market Intelligence, despite the company reporting first-quarter results that fell short of expectations. Wall Street was more focused on the company's industry-best margins and healthy outlook for the future than it was on one-time results.

Often, such a miss causes investors to head for the emergency exits, but in Allegiant's case, the stock actually rocketed higher post-earnings. Perhaps investors were focused on Allegiant's 20%-plus aviation margins in an industry where 10% or less is the norm. Or they were relieved to see that Allegiant, despite its first-quarter miss relative to expectations, maintained its 2019 earnings-per-share guidance of $13.25 to $14.75, even with increasing jet fuel costs. 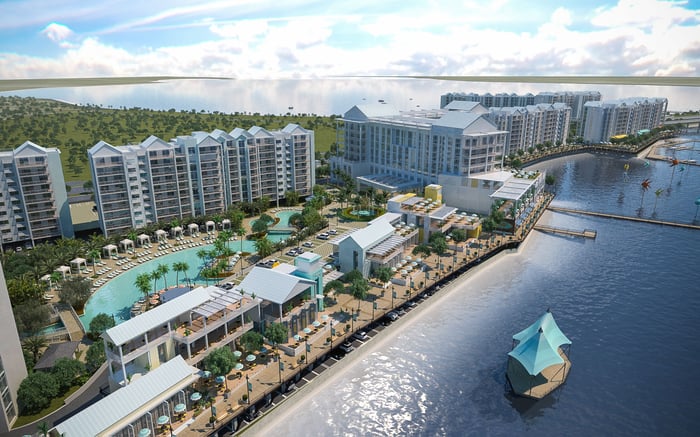 Allegiant's airline operations are benefiting from the company's transition to a fleet of newer, more fuel-efficient Airbus aircraft. Management expects to increase capacity by 7.5% to 9.5% for the year, with a heavy weight toward the year-end holiday travel season.

So what's holding Allegiant earnings back? The company's non-airline projects, including the somewhat contentious Sunseeker resort that Allegiant is constructing in Florida and a chain of family entertainment centers, are in start-up mode and currently consuming cash. Allegiant expects to spend $250 million to $300 million in capital expenditures (capex) on its Sunseeker resort this year and $15 million to $20 million on its other projects.

There's no questioning the strength of Allegiant's airline operation. But there is one question, for at least some on Wall Street: With the transportation business so strong, should Allegiant be devoting resources to the non-airline businesses? The company's first-quarter earnings call turned somewhat contentious when analyst Duane Pfennigwerth asked about balancing non-airline spending with other priorities, including the company's dividend.

Company president John Redmond responded by first saying, "I must admit I wasn't going to take a question from you just because of how unprofessional and disrespectful you've been in the past, but I'll go ahead and I'll rise up to the occasion." Later, Redmond got into a heated back and forth with Wolfe Research's Hunter Keay over the dimensions of the pool at the Sunseeker and how the resort would be marketed to business and leisure travelers.

Allegiant management believes it can use the data it has on its airline customers to cross-sell hotel rooms, golf vacations, and family experiences. Some on Wall Street would rather Allegiant stick to operating their airline.

The proof is in the results. Shares of Allegiant have outperformed the S&P 500 by nearly 30 percentage points year to date but trail the S&P 500 by a similar amount over the last five years.

Shareholders should keep a close eye on how the projects develop throughout the year and into 2020. Hopefully, they'll continue to sit back and enjoy the ride on this well-performing airline.