Please ensure Javascript is enabled for purposes of website accessibility
Log In Help Join The Motley Fool
Free Article Join Over 1 Million Premium Members And Get More In-Depth Stock Guidance and Research
By Steve Symington - May 4, 2019 at 4:43PM

Why the Japanese gaming giant is playing coy over Switch's China debut.

After news broke last month that Nintendo (NTDOY -1.80%) is teaming up with Chinese tech giant Tencent (TCEHY -1.74%) to finally launch its Switch gaming console in the Middle Kingdom, shares of the Japanese gaming leader initially soared soared, with good reason.

After all, it's been more than two years since Nintendo officially introduced Switch to the rest of the world. But China remained an elusive geography -- at least outside of existing grey-market Switch sales in the country -- given its complicated regulatory environment and the need for a domestic partner to facilitate new console launches.

But investors shouldn't get too excited just yet. With its fiscal fourth-quarter 2019 report last week, the stock fell after Nintendo took the opportunity to temper shareholders' enthusiasm over Switch in China. 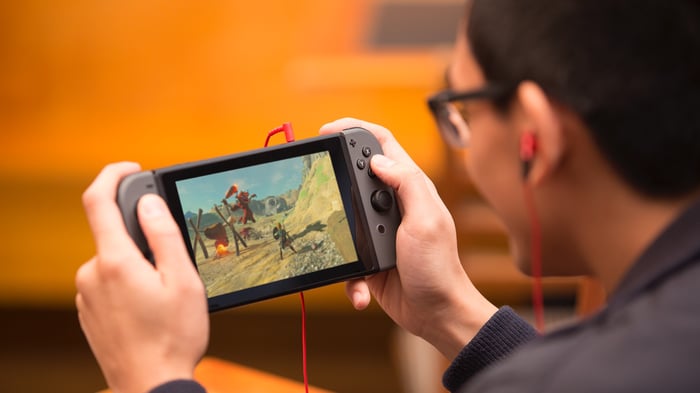 In particular, Nintendo noted that while it's Tencent collaboration is "in progress," it still hasn't factored China Switch sales into its new fiscal-year guidance as "the launch timing is undetermined."

Though Switch sales last fiscal year fell slightly short of management's guidance for 17 million units, we should recall that target was only recently lowered at the end of January from Nintendo's initial goal of 20 million. The revision caused Nintendo shares to plunge almost 20% over the ensuing weeks.

After coupling that relative shortfall with the uncertain nature of the gaming industry in China -- where consoles were banned from from 2000 to 2015, and where government regulators more recently imposed a nearly year-long freeze on new game title approvals from all developers in the country, including Tencent -- it's hard to blame Nintendo for declining to include Switch China sales in its forecast in these early stages.

That said, investors shouldn't rule out the chance that Nintendo could be under-promising with the intention of over-delivering, particularly if Nintendo is doing so in modeling its existing core business outside of China for now. With shares down around 18% over the past year, and when more specifics begin to surface -- think launch dates, pricing, profit-sharing with Tencent, and unit-volume expectations for Switch in China -- any incremental contributions from the deal could serve as a catalyst to drive Nintendo shares higher in the coming quarters. And I think patient, long-term shareholders would do well to consider opening or adding to their positions before that happens.

How Nintendo Is Reinventing Itself

6 Statistics That Hint at the Future of Gaming Stocks

Will an IP-centric Strategy Lead to a Brighter Future for Nintendo?