Aurora Cannabis' (NYSE:ACB) growing cannabis empire spans five continents. The company operates in two dozen countries. But the U.S. isn't one of them.

The problem with Aurora's lack of a U.S. presence is straightforward. Currently, nearly 80% of the world's total legal marijuana sales are made in the United States. That amount will decline as the Canadian adult-use recreational marijuana market and international medical cannabis markets pick up steam, but the U.S. is likely to dominate global marijuana sales for a long time to come.

Don't think for a second that Aurora isn't exploring angles to get into the U.S., though. In fact, the company already has a backdoor strategy for entering the U.S. market that has flown under the radar for many investors. 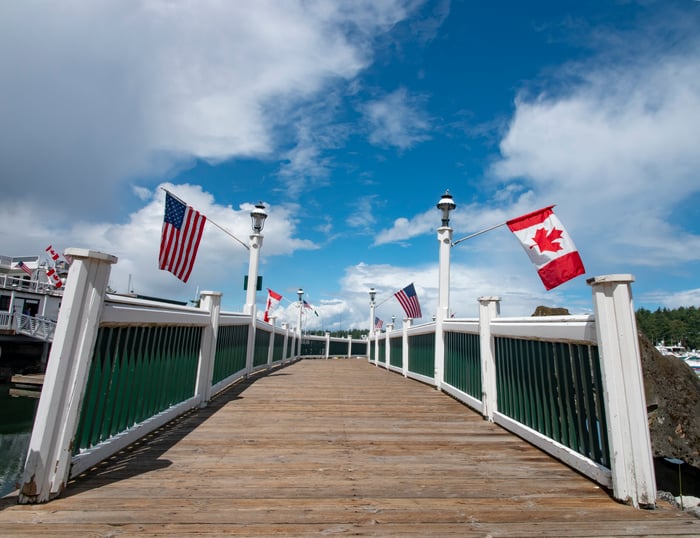 Aurora announced in June 2018 that it planned to spin out its subsidiary with the intent for the new entity to focus primarily on the U.S. marijuana market. In September of last year, that subsidiary, Australis Capital, began trading on the Canadian Stock Exchange (CSE), with its headquarters in Las Vegas.

Thanks to the signing of the 2018 Farm Bill into law, hemp is now legal in the U.S. Both hemp and marijuana come from cannabis plants. However, hemp, unlike marijuana, contains very low levels of the psychoactive ingredient THC.

Australis Capital has already expanded into the U.S. hemp market. In January, it invested $3 million in Folium Biosciences, the largest vertically integrated producer, manufacturer, and distributor of hemp-derived phytocannabinoids in the United States. But what about Aurora? So far, the company has hesitated to make its move.

Aurora CEO Terry Booth stated in February that the company would enter the U.S. hemp market "when it's proper to enter, and when it's legal to enter into the United States market." However, two of Aurora's top rivals, Canopy Growth (NYSE:CGC) and Tilray, have already taken big steps to expand into the United States.

Canopy announced in January that it was building a large-scale hemp industrial park in New York state. Tilray followed up the next month by announcing that it was acquiring leading hemp food products company Manitoba Harvest, which has a significant U.S. presence.

From back door to front door

Like many cannabis investors, Aurora's executives are no doubt anxiously monitoring the progress of the STATES (Strengthening the Tenth Amendment Through Entrusting States) Act. The bill has been introduced into the U.S. House of Representatives and the U.S. Senate. If it becomes law, the STATES Act would keep the federal government out of the way of states that have legalized marijuana. And it would likely pave the way for Aurora to jump headfirst into the U.S. marijuana market.

So far, though, Aurora hasn't given any hints that it might follow in the footsteps of its main rival, Canopy Growth, in buying the right to acquire a U.S.-based cannabis company that already has significant operations. Canopy recently announced a deal to buy Acreage holdings that's contingent upon the legalization of marijuana in the U.S. at the federal level.

You can probably expect if the effort to change U.S. marijuana laws is successful, Aurora will move quickly in exercising its warrants to buy the 40% stake in Australis Capital. The company's backdoor strategy for entering the U.S. just might become its front-door strategy in the not-too-distant future.