Starbucks (NASDAQ:SBUX) has one of the strongest loyalty programs in the United States. Its Starbucks Rewards program allows members to earn free drinks, food, and more.

The program has grown steadily for two reasons. First, it's tied to the company's app, which has a mobile order and pay function that allows customers to skip the line in stores. Second, it offers real value beyond just the rewards you can earn, including access to events like Happy Hours (discounts for certain drinks on some afternoons), days where you can earn double "stars" (rewards points), and other special offers.

For consumers, it makes sense to join Starbucks Rewards because the app makes it easier to place and receive an order in a timely fashion. CEO Kevin Johnson gave an update on the program's growth during the company's second-quarter earnings call.

"With respect to driving digital relationships, we are pleased with the continued momentum of our Starbucks Rewards program," he said. "In the second quarter, we expanded our active member base by half a million customers, a 13% increase that takes active Rewards membership to 16.8 million."

That's a big number, and an important one when you realize how Starbucks Rewards works to drive sales. 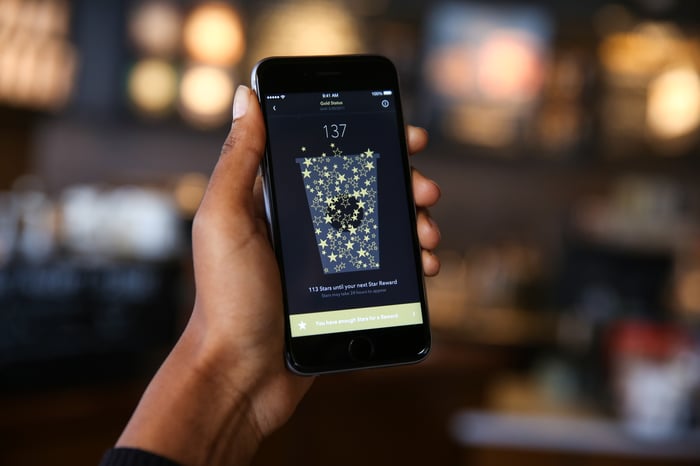 Is Rewards Tall, Grande, or Venti?

Starbucks had a solid quarter in general. Same-store sales rose by 4% in the United States, and overall transactions increased slightly in the company's home market. That was driven, at least partly, by the growth of the chain's loyalty program. "This momentum has a positive impact on our results with Starbucks Rewards members accounting for 41% of sales in U.S. stores in Q2," Johnson said.

That's a fairly stunning number, and it shows just how important it is for the chain to get customers to join Starbucks Rewards. Once a consumer has joined, he or she is more likely to come back -- both because of the promise of earning free stuff and because the well-designed app makes it so easy to order, pay, and skip the line.

Starbucks Rewards isn't just driving sales in the U.S., either. Starbucks has also been deploying it in its second-most-important market: China. According to the CEO:

We are very pleased with the performance of the new Starbucks Rewards program in China. Since the launch a mere four months ago, member acquisition has accelerated and 90-day active Rewards members increased by 1 million during Q2 to total of 8.3 million. The phenomenal growth of the Starbucks Rewards program in China is a testament to the power of the brand. We are now building on this momentum with plans to bring mobile order and pay to China by the end of fiscal '19.

If you don't have the Starbucks app -- and with it, access to the Rewards program -- you won't even see the chain's full menu. The menu boards in Starbucks stores display a sort of greatest hits. That's not to keep certain items exclusive to members: It's just a way to simplify the chain's offerings for customers who aren't as familiar. That, in theory, helps improve the in-store customer experience, since less-frequent customers won't be faced with overwhelming choices. Once you join Starbucks Rewards and download the app, however, you get the full menu in an easy-to-digest format.

Starbucks has created a loyalty program that drives business. It offers real value for members and, maybe more importantly, adds convenience. That has driven sales growth for the brand. As Starbucks Rewards grows in both the U.S. and China, it should become an even more important part of the company's effort to boost sales.