Please ensure Javascript is enabled for purposes of website accessibility
Log In Help Join The Motley Fool
Free Article Join Over 1 Million Premium Members And Get More In-Depth Stock Guidance and Research
By Rick Munarriz - May 5, 2019 at 11:00AM

The world's leading theme park operator is making it a lot more important to book an on-site stay, with Star Wars: Galaxy's Edge opening on both coasts.

If Walt Disney (DIS 2.43%) ever had a reason to jack up rates for its on-site resorts, it would seem to be the arrival of Star Wars: Galaxy's Edge. The debut of the richly themed 14-acre expansion at Disneyland on May 31 and Disney World on Aug. 29 is going to bring an influx of visitors to the media giant's theme parks on both coasts, and there are now some extra incentives to stay on Disney property.

The first bell chimed on Thursday, when Disneyland opened up invitations for visitors hoping to check out Star Wars: Galaxy's Edge through the first three weeks and change of its debut. The online reservations were all claimed within the first two hours of availability. The only way anyone else will be able to visit the new land through at least June 23 is to book a room at one of Disney's three Anaheim-owned hotels.

The second bell rang on Saturday, when the much larger Disney World announced that guests at its more than two dozen resorts will have access to Florida's version of the Star Wars-themed area for three extra hours in the morning before day guests are allowed access. Disney World hotel guests will be able to get into Star Wars: Galaxy's Edge, as well as Toy Story Land, as early as 6 a.m. from Sept. 1 through Nov. 2, well ahead of the park's official opening. 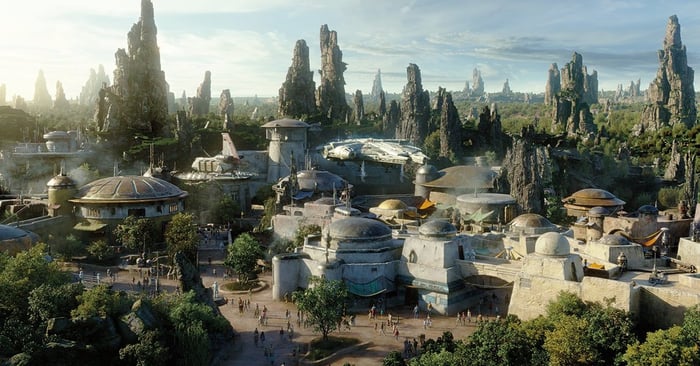 Sensing a disturbance in the force

There has probably been a fair amount of scrambling for June stays at Disneyland's three hotels since Thursday, and one can imagine that late summer and early fall bookings at Disney World are also starting to go through the roof. Trying to get into either new sci-fi expansion won't be easy without paying Disney for a place to stay through the first several weeks of each area's launch.

Disney knows all about making more out of less. Revenue growth has outpaced attendance gains for years. Ticket prices go up every year, and now Disney has every reason to work the lever of hotel pricing. Visitors often try to get more bang for their buck by staying offsite, but if Star Wars is what's driving folks to Disneyland in a few weeks and Disney World in a few months, they may as well start pricing out availability without wincing at the sticker shock.

Disney stock hit another all-time high last week. The shares have been rallying on the strength of the company's well-received Disney+ streaming service media event in mid-April, followed by the record-breaking box office debut of Avengers: Endgame two weeks later. Disney's theme-parks business hasn't even factored into the stock's strong rally, but it's easy to see why it's going to be a big driver for the media behemoth's financial performance through the next few quarters.