Please ensure Javascript is enabled for purposes of website accessibility
Log In Help Join The Motley Fool
Free Article Join Over 1 Million Premium Members And Get More In-Depth Stock Guidance and Research
By Rich Duprey – May 6, 2019 at 6:06AM

Boats are doing better than any of the powersport vehicle maker's bigger, more important divisions.

Even in winter, Polaris Industries (PII 0.82%) benefited from the acquisition of Boat Holdings last year. The addition was responsible for most of the sales growth the powersports vehicle maker recorded in the first quarter. But with softness in some of its most important legacy businesses, Polaris' results were uninspiring even if they did come in ahead of projections.

Revenues of $1.5 billion matched Wall Street's forecast, while earnings adjusted for amortization and restructuring costs were $1.08 per share, handily exceeding analyst expectations of $0.92 per share.

While that allowed the powersports vehicle maker to raise its full-year guidance by $0.05 per share on both the upper and lower ends, forecasting earnings between $6.05 and $6.30 per share, the actual performance of the company left something to be desired. 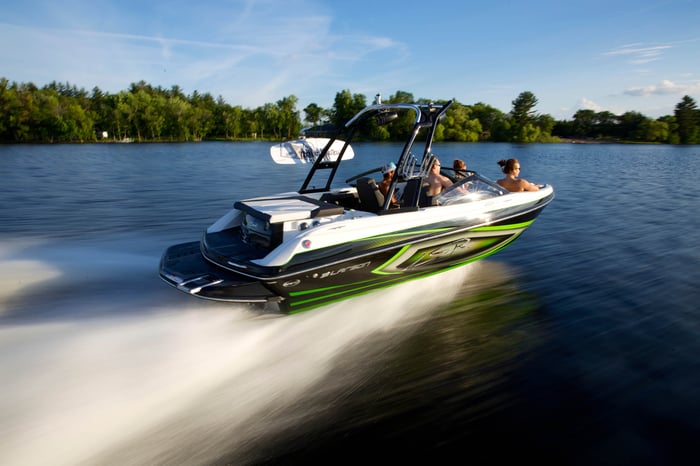 As one would expect from a quarter that featured cold, snowy weather, snowmobiles contributed to Polaris' growth with sales up by mid-single-digit percentages. Unfortunately, it's a smaller segment than its primary off-road vehicle business, and it could not overcome the 10% drop in ATV and side-by-side sales in the period.

Winter weather also caused motorcycle sales to fall, with Indian Motorcycle suffering a slight decline. And it didn't seem to matter what the weather was when it came to the three-wheeled Slingshot, as its sales tumbled again regardless. CEO Scott Wine did say Polaris has figured out what's wrong with Slingshot and is addressing it. It's not expecting the trike to return to profitable growth this year, though he's confident it will eventually.

Even so, Wine's patience is not limitless, and he said if Slingshot sales don't turn around in a couple of years, Polaris will revisit its investment. It's likely that its lifeline is a lot shorter than that. If sales don't improve this year, we may see its production shut down sooner rather than later. It is a constant drag on performance and profitability, and dealers are looking to get out of their contracts to carry it. Slingshot was an idea worth a shot at the time because of softer demand for its other products. Today, though, it has larger opportunities elsewhere such as boats. Management could free up capital for these other prospects should it kill off the Slingshot sooner than later.

Another one of those better bets is its new FTR 1200 motorcycle it will begin selling. Born out of Indian's wildly successful flat-track racing program, the FTR 1200 is seen as a motorcycle that could help spur more sales. Polaris has a facility in Poland to which it will shift production for the European market, but right now that plant produces only the Indian Scout and needs to be adjusted for the FTR. Even so, the impact of tariffs remains substantial, and Polaris anticipates the motorcycle segment's profitability will be "challenged this year" as a result.

It also continues to have problems in the aftermarket business, as its Transamerican Auto Parts (TAP) unit continues to fall, with sales down 2% from the year-ago period. (Other aftermarket brands apparently did quite well this quarter.)

TAP continues to have problems at wholesale and with e-commerce, just as it did last quarter, part of which ended up causing it to lose access to Amazon.com's (AMZN 1.79%) Prime membership program. Although Polaris didn't specify what the problem was, it noted it hadn't lived up to the requirements of Prime and was booted off, though after making adjustments it says it was able to regain access.

TAP also had problems with its own website due to upgrades being made, and, similar to the hiccups Polaris said it experienced with parts and such when it made similar changes, it suffered a slowdown with TAP.

Yet there's been no real indication that the slump TAP has been in since Polaris acquired it will reverse anytime soon; it, too, is serving as a drain.

The bright spot is Polaris' boat acquisitions, which added $185 million in sales this quarter and benefited from the hikes it imposed earlier this year that raised average selling prices 7%. It noted that traffic at boat shows was higher, and that tends to be a good indicator of sales later on. It is looking for the boat business to contribute about 6 percentage points to the 11% to 13% growth in revenue this year.

Polaris Industries is still a solid business, having produced more than $200 million in trailing free cash flow, which reflects a seasonal decline in the first quarter. But its better earnings outlook for the year is one that's not necessarily based on business picking up. Rather it counts on macroeconomic factors like better currency exchange rates and lower interest expense to improve more than it had originally forecast.

We are into the start of the spring selling season for off-road vehicles and motorcycles, but both markets are weak, which will put pressure on the company to show it can get sales in its most important segments growing again.

John Mackey, CEO of Whole Foods Market, an Amazon subsidiary, is a member of The Motley Fool's board of directors. Rich Duprey has no position in any of the stocks mentioned. The Motley Fool owns shares of and recommends Amazon and Polaris Industries. The Motley Fool has a disclosure policy.