Polaris Industries (NYSE:PII) is looking to cash in on its success on the flat-track motorcycle racing circuit. Following last year's triumphant return to the sport after a 60-year absence, it has dominated the racetrack again so far this year.

Now, the powersports vehicle manufacturer said it will be making a street version of the Indian Scout FTR750 motorcycle that has been winning the American Flat Track series races. It's a move that could also raise the bike maker on the motorcycle sales leaderboard. 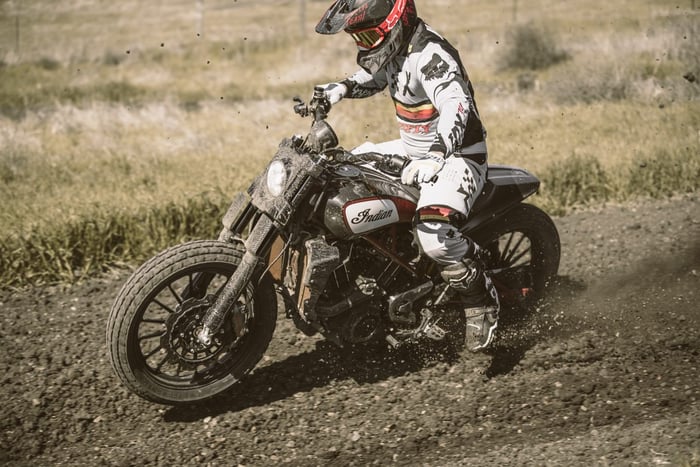 Out of 18 races last year, the Indian Wrecking Crew team of Jared Mees, Bryan Smith, and Brad Baker won 14. Lead rider Mees won 10 of them, and set a single-season record of 17 podium (top three) finishes. The team is having an even better performance this year, winning all 11 races run so far, with Mees winning nine of them. (He was disqualified from a 10th win after a prohibited chemical application was found on his motorcycle's tires.)

All of Indian Motorcycle's riders, whether team members or private entrants, use an Indian FTR750 that Polaris built purposely for its reentry to the racing circuit. The bike's phenomenal success has come against Harley-Davidson (NYSE:HOG), which dominated the flat-track sport during Indian's absence. Although Harley also introduced its own upgraded motorcycle for the track, the XG750R, it has not fared well against the Indian.

Building a street version of the bike that has taken down Harley has Polaris thinking it might be a big seller, because there has reportedly been growing demand for one. When it unveiled a prototype FTR1200 at the Milan Motorcycle Show earlier this year, Polaris said the feedback was overwhelmingly in favor of putting the bike into production.

As of now, there are few details available about the motorcycle's specifications. It's expected to be ready sometime next year and will be inspired by the FTR750 as well as the company's long history in flat-track racing. Indian says it will "embody a flat tracker style, housed in a trellis frame and powered by a new V-twin engine."

Because a tracker bike is meant for racing, street versions copy that look and typically feature a single seat that supports a more upright sitting posture. They have the pared-down look of a dirt track racer, but still offer the accessories needed to be legal to ride on the street. Smaller and lighter, but offering greater agility, the tracker differentiates itself from other styles.

Although Indian Motorcycle says there is a groundswell of demand, will they sell?

While there might be a good argument to be made that companies that advertise on Nascar racing cars are wasting their money (just how many sales does a small sticker on a car's fender really add?), the carmakers themselves reap a lot of free advertising from entering their vehicles. There's a saying in the sport: "Win on Sunday, sell on Monday" -- meaning whichever car wins a Nascar race one day sees a boost in sales the next.

The races highlight a motorcycle manufacturer's technology and innovation, and having a bike that is overwhelmingly dominating the racing circuit, as Indian's currently is, could very well provide a big boost to sales. Polaris has been enjoying sales growth for its Indian motorcycles, with retail sales up by low single-digit percentages in the first quarter, while Harley-Davidson suffered a 12% plunge in its own sales in the U.S. The new Indian FTR1200, when it finally does hit the market in 2019, could rev up those sales even further.

But pricing could well be one of the most important factors in how well the Indian street tracker sells. Harley has tried several times in the past, with its XR1000 -- which, like most things Harley, was too expensive and didn't sell well -- and the XR1200, which was only produced between 2009 and 2013.

Also, the styling needs to be right. Bike enthusiasts like the FTR750 and the FTR1200 Custom that Indian showed off; putting out something that looks completely different might turn them off to buying one.

Moreover, because Polaris Industries is not very transparent with its sales numbers, it will be hard to judge how well the product actually performs. Only when a bike like its Scout really takes off does it call out the results, though without revealing any sales numbers.

However, since the flat-track racing circuit is but a smaller subset of the overall motorcycle market, I wouldn't expect the sales figures to inspire awe. Even so, the new Indian FTR1200 could rev up enough sales to make it another popular addition to Polaris' growing line of bikes that are successfully challenging Harley-Davidson on the track and on the street.